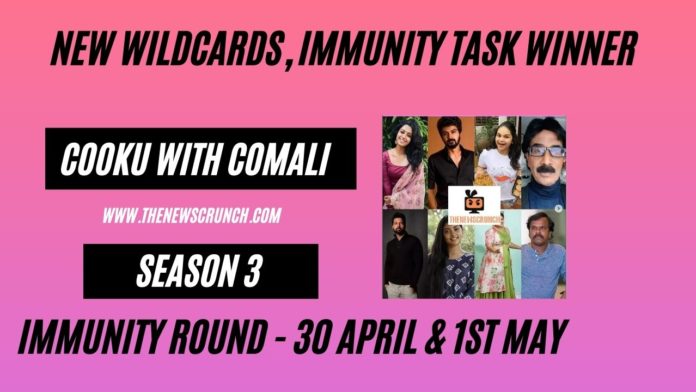 The ‘Advantage task’ round will be crucial the cooks. Two wildcard entries entered the show. Cook With Comali 3 featured the fourth elimination last week as Santosh left the show. However, the competition is tough and worth watching. The fifth elimination of Cook With Comali Season 3 is a suspense and will go down to the wire. The wildcard entries and Ammu Abirami are the bottom 3 contestants so far.

The first advantage task featured eating the most amount of bajjis. These four teams won the first task of the advantage task. Surprisingly, Ammu and Shruthika lost the first round.

Vidyulekha and Manimegala won the advantage task. However, Muthukumar and Barath reached quite close to the winners.

Ammu was in the bottom two for elimination last week. Elimination challenge will feature an intense battle next week. However, the immunity task winner will get a crucial advantage next week.

Dharshan and Grace stole the immunity round cooking with excellent dishes. However, Aravind and Ammu Abirami entered the bottom two and it was an emotional suspense. There will be no elimination this week. Santosh is eliminated for Cook With Comali 3 last week.

There are high chances of Roshini or Ammu getting eliminated in the next week. Mano Bala, Rahul and Antony are the three eliminations in CWC Season 3 so far.