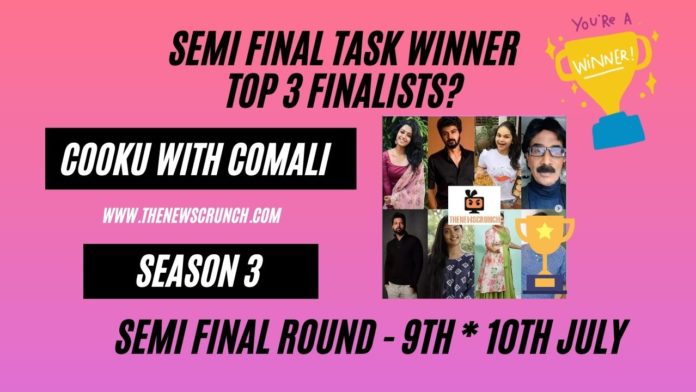 ‘Cooku With Comali Season 3’ is back this week with a suspense filled Semi finals task for deciding the top 3 finalists on the 9th and 10th of July 2022 as the contestants face the immunity challenge this week. ‘Cooku With Comali Season 3’ featured the no elimination last week as a result of the ticket to finale. Shrutika is the ticket to finale winner of CWC3 and the first finalist.

Ammu Abirami along with Bala and Manimegalai won the interesting advantage task round two which involved guessing the names of fruits and vegetables.

Shrutika stunned the judges with her exquisite dish last week to become the first finalist. However, the limelight is on Muthukumar and Ammu Abirami to deliver as Tharshan and Vidyulekha are strong contenders.

There will be one elimination this week. Ammu Abirami is eliminated for Cook With Comali 3 two weeks ago.

There are high chances of Muthukumar or Ammu getting eliminated in the next week. Mano Bala, Rahul and Antony are the three eliminations in CWC Season 3 so far.