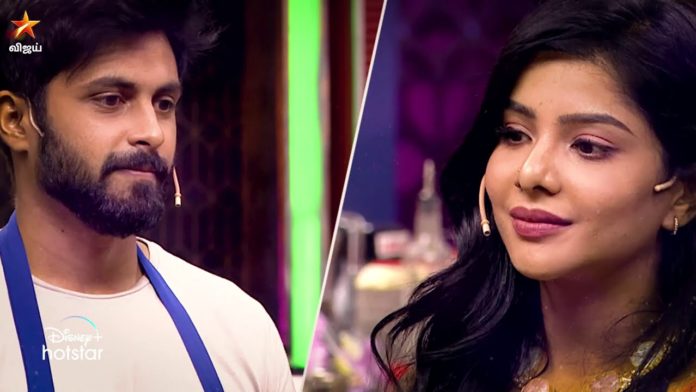 While Shivangi is amused with her pair this weekend, she does not do enough to save her beau Ashwin in the show. However, the return of Pavithra is a lifeline for Ashwin. Baba Bhaskar is absent this week.

The first task involves making the most number of ‘pori urundais’. Pugal is paired with Kani this weekend. However, Bala gets Pavithra as his pair. The battle of all sorts begins with a touch of comedy and drama between the tasks.

Cooku With Comali 2’s next task in the elimination round features the ‘confusion chair’. The Comalis will enter a separate room and they will keep in mind all the ingredients mentioned in the ‘confusion room’. Pugal is doing his level best as usual in this task to entertain the audience.

The next task in the elimination round involves the hat and balancing task. Shivangi is visibly upset with the task as things do not work in her favor.

The most awaited task of the weekend is the heartbreaking elimination main task. Ashwin and Pavithra will battle it out for survival in Cooku With Comali 2. Pavithra’s fans and Ashwin’s fans are disappointed with the promo from Vijay television.

However, the show must go on and one contestant will be eliminated. Both the contestants choose broccoli but who will impress Chef Venkatesh Bhat?

Cooku With Comali 2 Elimination This Week

According to reports, Pavithra will be eliminated in Cooku With Comali Season 2 this weekend.