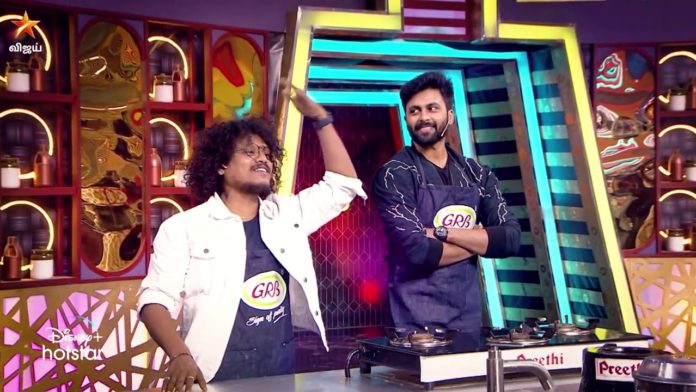 Cooku With Comali 2 completed its episode on Saturday with the fun filled immunity task. The entry of the new wildcard entry and extension of the show brought delight to the audience. Much to the expectation of the audience, the immunity task was a laugh riot. Six contestants are in contention to win this season while the Comalis continue to entertain the crowd.

The tasks intensify in Sunday’s episode. There will be intense competition among the contestants to win the much needed immunity from elimination next week. The contestants and their respective Comali partners will balance a pot on their head while the other team mate cooks a dish cooked by one of the judges.

Pugal continues to woo the audience with his hilarious comic sequences. After finishing the ‘Mixture’ challenge the contestants were in for the next challenge. Shakila and Rithika’s teams lost the opportunity to participate in the top 4 for the next immunity challenge. Kani and Sunitha won the first task. The next task involved the falooda challenge. Baba Bhaskar and Ashwin were competing fiercely.

It finally boiled down to Pugal and Sarath who performed brilliantly. However, Pugal and Ashwin had the last laugh. Ashwin won the advantage task by a whisker. As a result, all contestants will be wooing to derail Ashwin’s performance in the upcoming immunity task on Sunday.