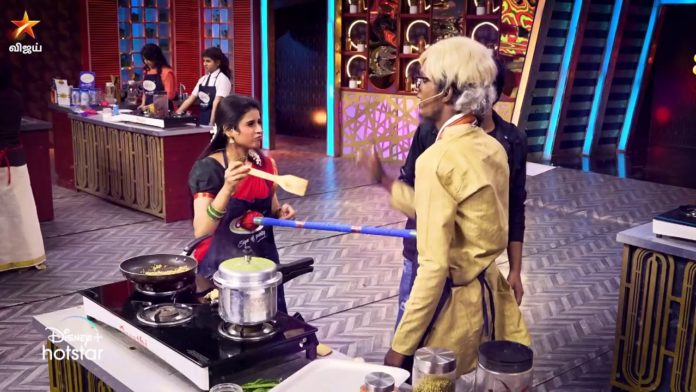 ‘Cooku with Comali 2’ featured one of its best episode of the second season on Saturday. However, the much awaited ‘Elimination task’ will be the highlight of Sunday’s episode on the 21st of February. Much to the delight of the audience, Pavi won the advantage task which is elemental for her victory over her fellow contestants and to stay safe.

The advantage tasks during Saturday’s episode were hilarious and entertaining. Pugal and Baba Bhaskar enlightened the audience with a constant smile while Shivangi stuck to her task. Shivangi was instrumental in helping Pavi win the Round 2 of the advantage task. As a result, Pavi received a decisive advantage during her elimination (main) task performance.

The first task of the elimination round featured a ‘Carrier meals’ task. The contestants had to make a tasty blend of carrier meals with a twist in the tale. They had to balance a stick between their bellies while performing the task and cooking the tasty dishes. There were several hilarious moments where Shivangi and Pugal struggle to strike a balance.

Ashwin had a disastrous experience with Manimegalai in both the advantage tasks as well as the main task. However, he will be safe from eliminations this week.

Cooku with Comali 2 Elimination This Week

The suspense filled elimination this week was announced on Sunday’s episode. Based on the performances of the elimination task, the judges Venkatesh Bhat and Chef Dhamu had a tough time in choosing the worst performer of this week. While Pavi made use of her advantage, Rithika was eliminated this week. As a result, Balaji’s prediction of getting Rithika eliminated came true.

Hence, Rithika is the elimination in Cooku With Comali 2’s episode on Sunday, the 21st of February 2021. The wildcard entry did not get much time to show her cooking prowess but was a significant entertainer in the CWC episodes in the last two weeks.