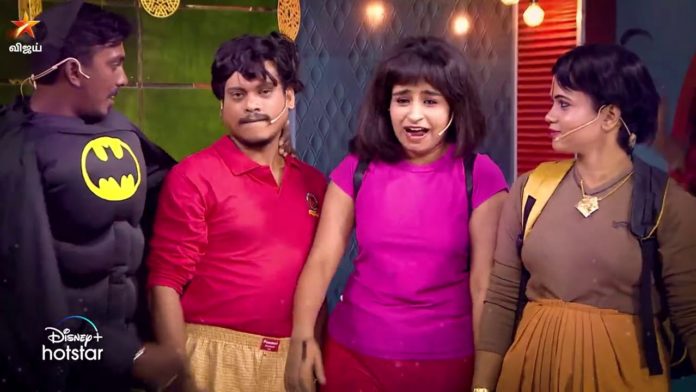 Cooku with Comali fans can rejoice as yet another weekend filled with hilarious episodes is here. Cooku with Comali 2 episodes on 13th and 14th February will feature the decisive immunity task challenges. The contestants will have some fun while the Comalis will entertain the audience during the Valentine’s day special weekend episodes.

The Comalis are dressed as superheroes this week. The episode on Saturday promises to be a laugh riot as Sunitha proposes to Ashwin. Shivangi is furious about it. However, It would be interesting to see if Pugal will flirt around with Pavitra or the new wildcard entrant.

Kavi and Sunitha are teamed up while Sarath is paired with Shakila. Baba Bhaskar is teamed up Manimegalai. The combinations are a continuation from last week’s task sequence.

The suspense around the ‘Immunity task’ winner remains. The audience need to wait until Sunday’s episode of Cooku with Comali 2 to find out the same. However, based on the previous performances, Ashwin or Baba Bhaskar will win the challenge.