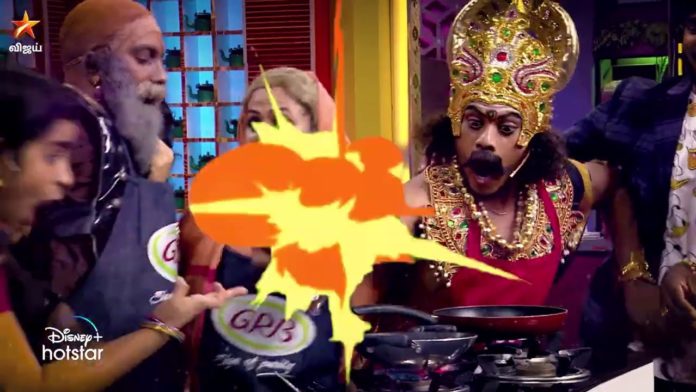 After a break last week due to the Super Singer grand premiere, ‘Cooku with Comali 2’ returns this week with some hilarious concepts in-store. Ashwin and Shivangi won the immunity last week. However, the battle continues for the remaining cooks to save themselves from elimination.

Baba Bhaskar and Shivangi are a pair for this episode’s task. Baba Bhaskar was amazed by Shivangi’s performance with cook Ashwin. This week Shivangi aims to prove her worth by teaming up with Baba Bhaskar. Balaji pairs up Kani while Shakeela is a part of the laugh riot with Pugal.

The ‘Comalis’ are dressed in different avatars this week which will make the episodes more interesting. The suspense around elimination continues. There are rumors about Pavitra’s elimination in this week’s episodes. However, official confirmation will be offered after the completion of today’s episode.

Shakti will Be a Part of This Week’s Episodes?

Another delight for the fans awaits this weekend. Shakti will be a part of this week’s episodes which will make the proceedings more interesting.

Aye Shaktii is gonna be there this week😁😂

The streaming of today’s episode on Hotstar OTT platform is delayed. As a result, an eager audience took to Twitter to voice their frustration.