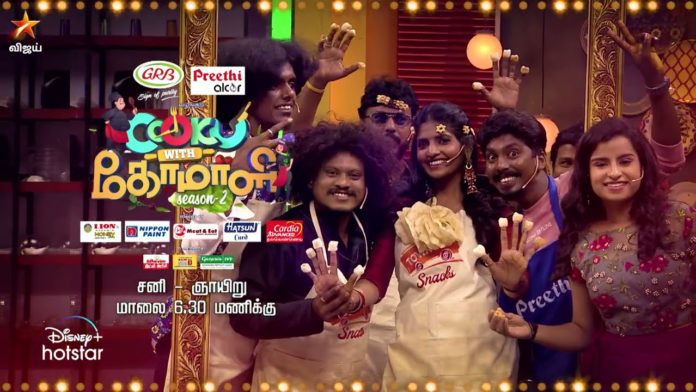 The five finalists of ‘Cook With Comali Season 2’ are Ashwin, Kani, Baba Bhaskar, Shakila, and Pavithra. There were multiple wildcard entries in the show. However, the sweetest among all was Rithika who will feature with her mother this weekend.

Pugal’s heartbreak moment is not far away as Pavithra enters the show this weekend with her beau. However, there will be some interesting twists and turns in the tasks for the celebration week episodes.

As always, the chief judges, Dhamu and Venkatesh Bhat will crack some jokes and have fun with the participants and fellow comalis. The ending of ‘Cook With Comali Season 2’ will leave a void in the hearts of the people. Nevertheless, this weekend promises to be fun-filled and a fantastic run-through for the finale week.

As always, Madurai Muthu impresses with his sick jokes. Pugal is a standout of this week as well. The chefs love to pull his legs. The suspense around the winner of ‘Cook With Comali Season 2’ is making waves on social media. However, the competition is tough and it will go down to the wire.