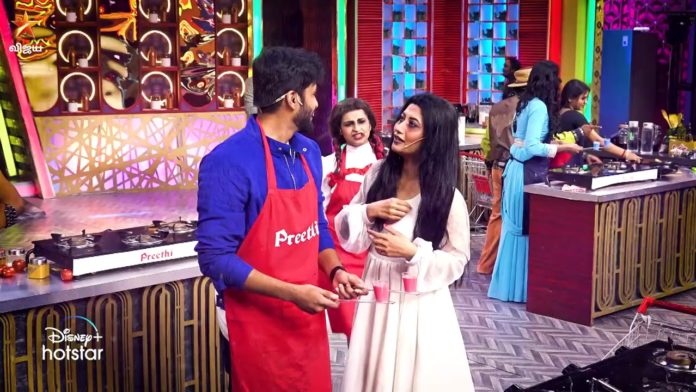 Cook With Comali 2 impresses with a fantastic episode Sunday, the 7th of March 2021. The top four contestants battle for immunity in a decisive week filled with intriguing tasks. Ashwin, Baba Bhaskar, Shakila, and Kani battle it out for immunity. Baba Bhaskar won the advantage task and swapped ingredients for Kani and Shakila.

The pressure was on Kani to deliver in a week filled with drama and rib-tickling comedy. As Pavi was absent this week, Dharshan entered the cooking competition. The main task for immunity featured multiple ingredients. The most interesting part of Sunday’s episode was Shivangi’s attempts to entertain Ashwin during the whole task.

The efforts taken by the cooks were amazing. The dishes from Ashwin, Baba Bhaskar, and Shakila won accolades. Ashwin’s efforts were a stand out as attempted something out of the world. Considering the time span of 50 minutes and the obstacles in place with respect to balancing the shot glasses on a scale.

Kani’s dish received average comments while Manimegalai was entertaining as Kanchana. As always, the standout performances from the cooks were from Shakila, Ashwin, and Baba Bhaskar. The Comalis stunned the audience with their performances and Pugal, Bala and Sarath were standouts as usual.

However, Baba Bhaskar won the immunity task with the millets pizza.

The next weekend will feature the elimination task. Wildcard Rithika was the last contestant to be eliminated. It would be interesting to see which talented cook will leave the show. However, the probability of elimination puts Pavi and Kani in danger.