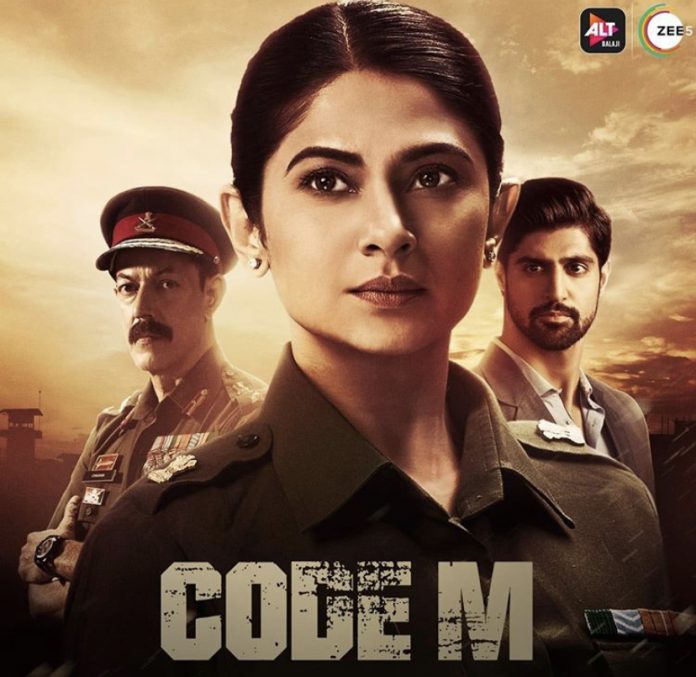 Code M is one of the most anticipated series that was to be launched by an ALTBalaji and ZEE5 joint venture. It was released on January 15th, on the occasion of Indian Army Day. It is an 8 episodic series which is directed by Akshay Choubey starring Jennifer Winget, Tanuj Virwani, Rajat Kapoor in the lead. The series also stars Seema Biswas, Keshav Sadhna, Aalekh Kapoor, Madhurima Roy, Gautam Ahuja, and Meghana Kaushik in pivotal roles. The series speaks about Monica Mehra (Jennifer Winget), an Indian Army lawyer, who unveils the unfortunate truth while investigating an open and shut case of a militant encounter.

The series begins with Colonel Suryaveer Chauhan (Rajat Kapoor) instructing the army Jawans about the foundation of duties that they have and should be doing rather than drooling over a cricket match. While he is on about how they need to portray adequate behavior we overhear a protest in the background at the army cantonment area over the killing of a respected officer over two alleged terrorists. What strikes apart as a novel scene is when the encountered militant’s mother tries to immolate herself. This scene strikes close to home in the very first episode and this shows the weightage that the situation carries along.

Our protagonist enters the story as we see Monica Mehra enjoying herself at a party. The situation takes an unfortunate turn when a rich and spoilt brat enters the pub and disrupts the atmosphere of the club passing lewd comments at Monica. What adds to the drama quotient is when she gives the brat a taste of his own poison. She points his own gun towards him and makes him apologize as she is an army officer.

Balance between personal and professional life

Being the empowered woman that is doesn’t mean that Monica holds no problems in her basket. Monica’s personal life is a complete roller-coaster. Stuck between her duties as an army officer and being a perfect fiancé to Dashrath Arora (Kashyap Shangari). Her wedding discussion would have to be put on hold with her would-be husband as she is called by Colonel Suryaveer to investigate an important case. Putting duty first Monica keep her wedding preparations aside and goes on to investigate. Suryaveer welcomes Monica and asks her to shut the inquiry as soon as possible so that they can put their energy towards more urgent issues such as protecting the border.

Monica’s investigation begins as she comes in contact with a defense lawyer Angad Sandhu (Tanuj Virwani) who helps her with a lead in the case. The issue with this situation is that Angad is none other than her ex-boyfriend. He helps her look at the case from a whole new perspective.

As the investigation progresses, Monica meet the fiancé of the dead terrorist, Serena (Meghna Kaushik). Moving closer towards the climax of the series, one lead links to the another and the investigation brings out who the culprit is in a clearer picture.

With so many questions in mind we wonder; will Monica be able to maintain a balance between her personal and professional life? Will she fall in love with Angad again? Will she find out who the culprit is? Are any army officials involves in the murder of the two militants? Will Monica crack the code? All the answers to your questions are embedded in CODE M.

With CODE M, Jennifer steps foot into the digital forum and she yet again dazzles with her performance. She proves her mettle as an actor with her serious action stunts and through the delivery of some heavy dialogues.

Tanuj Virwani as a lawyer and Monica’s ex-boyfriend shows an array of expressions. Having a talented actor like Jennifer in front of him he still manages to prove his skill and pulls off his role brilliantly, his screen presence is felt. Rajat Kapoor as Colonel Suryaveer Chauhan is a surprise element in the show, his action sequences are breathtaking. We feel for the poor Dashrath as he keeps waiting for Monica and his marriage with her.

The narrators have used appropriate terminologies for the narrative and have done a brilliant job with the tone of the subject. The series has a musical element with a few romantic songs along with some patriotic background score. This makes it wholesome and its gripping storytelling makes CODE M a spectacular watch.