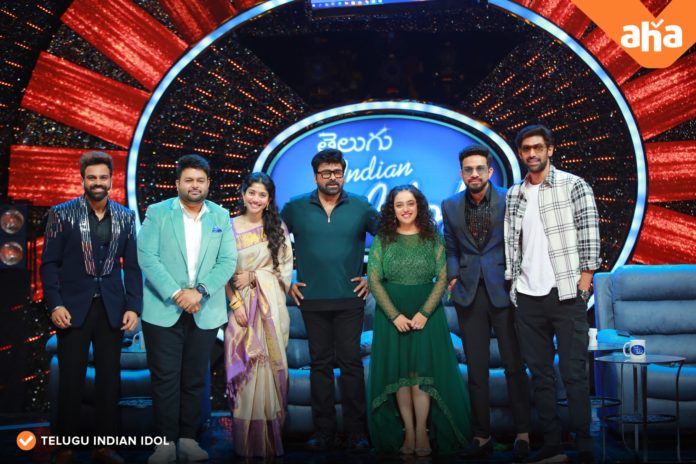 Hyderabad, 13th June: Their eyes were fierce with passion, and their hearts swirled fiery beats. A rhythm lived in their souls and translated into music as it reached their lips. With the contestants having toiled for 15 weeks over pure music and mesmerizing judges with many innovative themes capturing the hearts of millions of Telugu audiences over Telugu Indian Idol. aha is set to premiere the finale on 17th June at 9 PM.

Telugu Indian Idol Finale was filled with music and fierier in every way. The gala witnessed some exceptional performances by both the judges and the contestants in the presence of Tollywood’s Megastar, Chiranjeevi. Urging the contestants as they reached the finish line, the actor raised the finalist’s energy level with his kind words and energetic moves. The cherry on the cake is that Chiranjeevi went ahead and took the autograph of Pranati while the latter sang ‘Sandepodula Kada’ along with her mother and made Megastar groove to their tunes. The jamboree continued where Chiranjeevi was enthralled with Jayanth’s performance and gifted him a cooling glass where both enacted on Supreme hero’s 150th film Khadi’s tune. Withal, the special guest was spellbound by Sreenivas singing and said he was going to direct the finale now.

The grand finale of the Telugu Indian Idol was nothing short of an entertainment extravaganza packed with breath-taking performances and soulful acts. Making it a splendid evening, the grand finale commenced with power-packed performances by the top five finalists – Jayanth, Vagdevi, Sreenivas, Vaishnavi, and Pranati. Moreover, actor Rana Daggubati and his co-star Sai Pallavi graced the finale episode to promote their highly anticipated flick Virata Parvam. While Chiranjeevi is all set to spill some childhood memories of Rana and his son Ram Charan, Sai Pallavi encouraged the finalists and wished them luck in their future endeavours.

Do not miss the spectacular musical experience on this Friday, 17th June at 9 PM only on aha