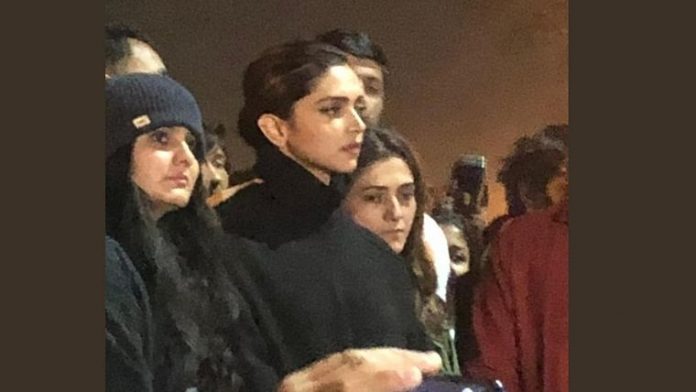 Deepika Padukone lands in a soup right before her mega movie release Chhapaak. Deepika Padukone is in the news for her upcoming movie and her busy promotions schedule for the same. However, to everyone’s surprise Deepika Padukone went to Jawarharlal Nehru University after her promotional activities to voice her support to the protesting students.

Deepika Padukone was spotted near the Sabarmati T-point where the alumni of JNU where holding a meeting against the recent violence in the campus. The meeting was called for by Leftist leaders like Sitaram Yechury, Kanhaiya Kumar, D. Raja and Yogendra Yadav.

This did not go down well with several fans of Deepika Padukone for taking this route to promote her upcoming movie.

Deepika’s upcoming movie faces stiff competition in the box office with the release of Superstar Rajinikanth’s Darbar and Tanhaji – The Unsung Warrior from Ajay Devgn. Deepika’s media presence has escalated enormously and it was surprising to see the world entertainment industry looking forward to the release of the movie.

With that being said, JNU is the place to be with whatever has happened for any politician or celebrity to gain the right amount of attention to swing the popularity in their favor. While the plight of the students is worrisome and the situation remains grim, it is disheartening to see celebrities and political outfits making hay from the sunshine of the students’ distress.

A very simple question put forward to Deepika Padukone by her own fans was if she would’ve been a part of the protests had her movie not released now.

Is Bollywood opportunistic and making the most of the situation to gain attention or are they genuinely in sync with the voice of the students, youth.

Being celebrities comes with great responsibility. Had Deepika Padukone associated herself with a students group protests, the scenario would’ve been different and she would’ve gained a lot of praise. However, she chose to attend a political meeting involving Left leaders which does not look right. Protesting for the rights of the students and freedom of speech can happen anywhere and it need not be from a politically motivated gathering.

Deepika Padukone lost the respect of thousands of her fans and it looks like the PR team managed to script a masterstroke but has Deepika’s positive image taken a beating? Only time will tell.

Here are some of the tweets from her angry fans:

So Deepika Padukone also joined Tukde Tukde gang and stood with Left Rioters. I was thinking of watching it but now I will #BoycottChhapaak. Shame on her. pic.twitter.com/98mj0Fml7K