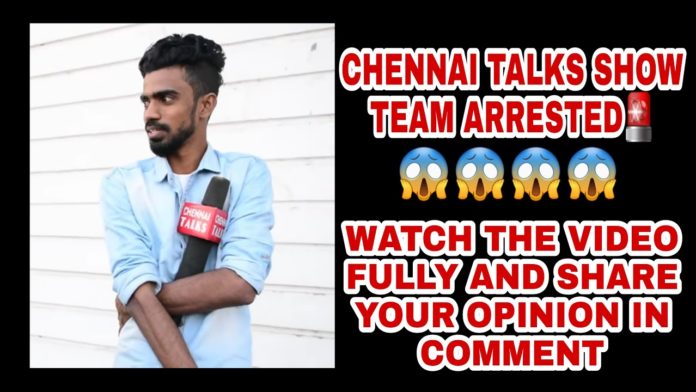 At the end of each year, it is customary to ask the public for feedback on how you felt that year, the problems you encountered, and the unforgettable events. In that sense, the Chennai-based YouTube channel ‘Chennai Talks’ has interviewed young women in the Besant Nagar beach area about how 2020 went.

Lakshmi, a woman from Besant Nagar, complained to the police about the YouTube channel crew, saying that they were asking obscene questions. Shastri Nagar police have registered a case and are investigating the complaint.

Police arrested 23-year-old Asen Patsha, presenter of Chennai Talks YouTube channel, Ajay Babu, 24, cameraman, and Dinesh Kumar, owner of the channel, for allegedly obscenely talking to the woman. The matter has been reported to the Cyber ​​Crime Police.

They have been charged under four sections of the Prevention of Violence Against Women Act, including engaging in indecent acts against women. Meanwhile, some YouTube channels are questioning people in public in the name of ‘public opinion’ and making it a viral video. Many have consistently accused some questions of being substandard to be viral. The arrest has caused a great stir.

The role of the YouTube site in today’s Internet world is enormous. New YouTube channels are being created every day. This allows us to get a lot of information. There are also controversial YouTube channels. In this context, the police launched an investigation into a complaint lodged by Lakshmi from Besant Nagar. That is, a few days ago, I was interviewed on behalf of the YouTube channel ‘Chennai Docs’ for talking obscenely to women.

They have uploaded this on their channel as it is. It called for appropriate action to be taken against those involved. In that case, the police filed a case under sections including the Information Technology Act for speaking obscenely to women.

According to the police, with their help, they are planning to delete the videos uploaded on the Chennai Talks YouTube channel.