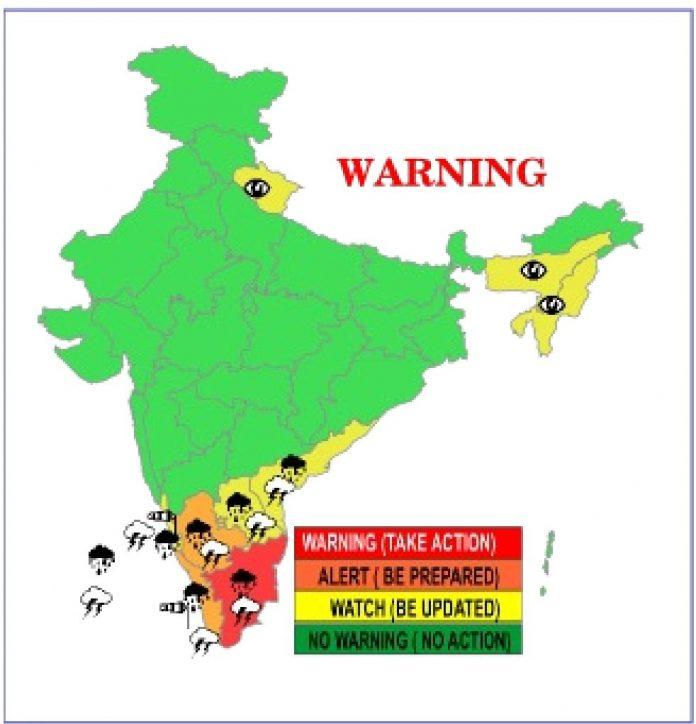 December 1st and 2nd are unforgettable days for the people of Chennai, thanks to the catastrophic floods of 2015 which devastated a vibrant city. Until November 28th 2019, the monsoon in Chennai was marginally below the normal expectations. However, the rainfall has picked up in and around the city as well as in several parts of Tamil Nadu.

According to the Tamilnadu Weatherman, heavy to very heavy rainfall is predicted in Chennai and nearby regions like Kanchipuram, Thiruvallur, Vellore and Chengalpet. Normal life is taking a setback as the city braces for even more rains in the next 24 to 48 hours. Panic is creeping in the minds of the residents as the devastating floods of 2015 are flashing by their memories. Red alert in imminent in and around Chennai. However, popular weather forecasters and government advisories believe that there is no reason to panic.

As of 1900 hours on December 1st, orange alert is active for Chennai and other parts of Tamilnadu.

Heavy flooding is reported in Chitlapakkam as residents as keeping a close watch on the lake level.

Knee deep water is observed in parts of Mudichur, Tambaram and Selaiyur. Fishermen are advised not to venture into the sea.

The residents of Chennai and neighboring regions are keeping a close watch on the lake storage levels. Considering that the lakes were dry a few months ago, there is not much to worry as of now. However, with steady inflows of about 1000 cusecs in Chembarambakkam and Poondi, the levels are increasing considerably as we report. The inflows are expected to increase further in the next 24 hours.

Current storage levels in Poondi is almost 33% of its full capacity with steady inflows and rainfall of about 7.8 cm. The storage levels are about 300% more than its level last year.

Parched Cholavaram receives its first significant inflow however, the lake is less than 5% full.

Red Hills is 50% full and is expected to receive more than 600 cusecs of inflows in the next 24 hours.

The dangerous Chembarambakkam storage levels is definitely getting all the attention thanks to its breach in the 2015 floods. The lake is 25% full and is receiving a steady inflow of about 1200 cusecs and it is predicted to increase upto 2000 cusecs in incessant rains continue.

Chennai Rains December 1st – How Much Rain Did Chennai Receive in 24 Hours?

According to the data received from The Tamilnadu Weatherman, the following are the numbers (in mm of rainfall received) in areas around Chennai and within the city of Chennai:

It is yet to be officially announced if schools and colleges will be closed tomorrow on account of heavy rains.

Chennai Rains is trending on Twitter and it is