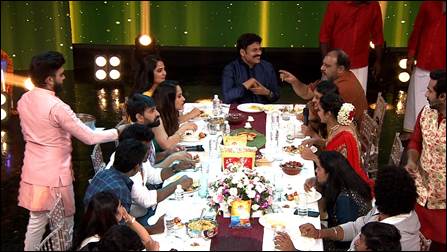 The festival of Ugadi brings families and loved ones together to ring in the New Year and celebrate new beginnings. This unique day is marked by day-long festivies, symbolizing the beginning of Telugu Calendar. Leading GEC Zee Telugu celebrated this festival with much enthusiasm this year, with an all exclusive event ‘Babu Gari Intlo Butta Bojanam’ with Nagababu, Anasuya Bhardwaj, Niharika Konidela and Tarun Master among others. With sensational performances by the stars from the channel, the event will be telecast on Sunday, 22nd March from 10 AM, only on Zee Telugu and Zee Telugu HD.

Zee Telugu’s most cherished anchors, Pradeep Machiraju and Ravi added to the entertainment quotient by hosting this exceptional event. Pradeep and Ravi took this opportunity to welcome the stars, bringing them together to celebrate the festival with a blend of fun activities and traditional games along with a unique set of performances by the stars.

There was a surprise element in the show when Anushka Shetty, made an unexpected appearance. Not only was she seen playing pranks with Anchor Ravi but also joining in the festivities with others. Additionally, there was a splendid act by Raghu Master and Johnny Master along with Chandra which had the special guests in splits.

The event also consisted of many fun games. Niharika Konidela performed a skit with ‘Gully Boys’, from the Adhirindi team. Anchor Ravi’s performance with his daughter made Nagababu and Niharika emotional along with the rest of the Zee Telugu family.

The episode also includes an exceptional performance by Anasuya Bhardwaj on the journey of Mahanati Savitri which was applauded by the Zee Telugu Kutumbam. Additionally, Bithari Sathi’s attempt to woo the beautiful Anushka with the ‘Jejamma’ song from her film Arundhati impressed Anushka so much that she confessed to being his biggest fan.

Tune in to watch ‘Babu Gari Intlo Butta Bojanam’ on Sunday,22nd March at 10 AM, only on Zee Telugu and Zee Telugu HD. To enjoy the show, subscribe to Zee Telugu, available in the Zee Prime Pack at Rs. 20 per month