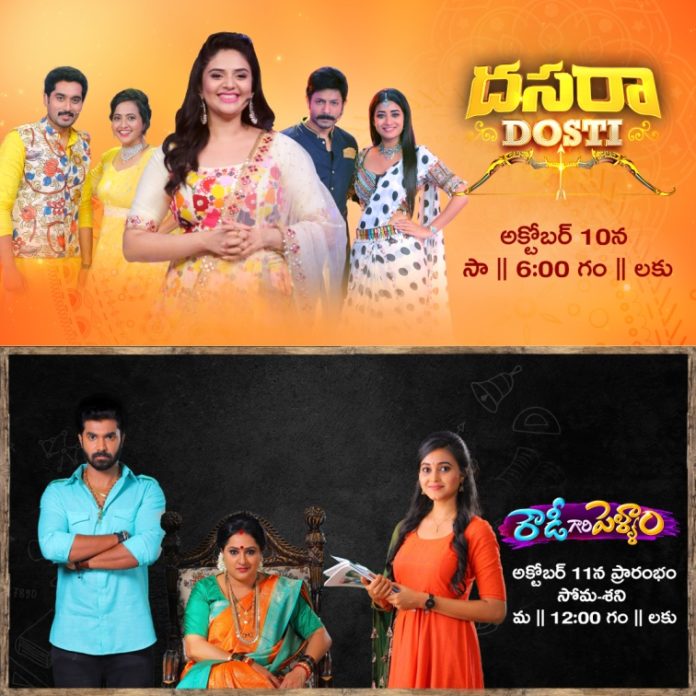 Different cultures in India celebrate the elaborate Navaratri festival in their unique way. It is called Dasha-Hara in the North. Vijayadashami in the South, and Durgotsava in the East. Be it any term, the cause for the celebration is one – to commemorate the triumph of good over evil. To add cheer for the festivities, Zee Telugu, one of the leading entertainment channels, is all set to telecast the special show ‘Dasara Dosti’ on 10th October at 6:00 PM followed by launching the fiction show titled ‘Rowdy Gari Pellam’ on 11th October at midnight only on Zee Telugu and Zee Telugu HD.

The auspicious festivity will bring all of the audience’s favorite artists to celebrate amidst spectacular songs and dance with sheer merriment. The exuberant Sreemukhi will host the ‘Dasara Dosti’event. Vaishnav Tej, one of the Tollywood industry’s dynamic personalities, and the charismatic actor Roshan Srikanth will grace the event.  On a special day, audiences can cheer to the tunes of the iconic song ‘Soundarya Lahari’ while Roshan will dance along with the lead female artists of the channel. The festival includes an exceptional dance by leading ladies of the track performing on Navadurga theme and Suryakantham fame Prajwal PD solo classical dance, followed by a puppet dance by Anusha, Prajwal, Kaushal, and Pandu as a special tribute to the ace Choreographer and Director Prabhu Deva.

We have enjoyed shows of all genres, starting from sophisticated love relationships and showcasing dynamics between the mother-in-law & daughter-in-law and fantasy shows. When one thought the Atha-Kodalu trend was nearing its end, Zee Telugu introduced another unique offering, ‘Rowdy Gari Pellam,’ that revamps the basic dimensions between them in an all-new, never-seen-before manner. Set in the backdrop of Kurnool, Eeshwari (Ameesha) are a wonderful daughter, a responsible teacher, and a decent human being. She believes relationships are everything. However, destiny has other plans for her. Eeshwari will marry Shiva (Aadarsh), deeply devoted to his aunt, Ammaji (Sujatha). Ammaji is a matriarch and the head of her family. She is also the head of the village and does not take ‘no’ for an answer. Ammaji is willing to go to any extent to own power. Will she tackle Eeshwari, who will turn into a torchbearer for her family and the one who is willing to partake in this power play? What happens when two strong-headed women stand against each other and play the power-hunger game? Tune-in to ‘Rowdy Gari Pellam’ starting 11th October at 12 PM

Tune in for the unending entertainment with ‘Dasara Dosti’ on 10th October at 6:00 PM and ‘Rowdy Gari Pellam’ starting from 11th October at midnight only on Zee Telugu and Zee Telugu HD.

To ensure you do not miss out on your favorite Zee Telugu shows, choose the Zee Prime Pack that includes Zee Telugu and Zee Cinemalu alongside seven other top channels of the Zee Network that cater to the daily entertainment needs of your entire family at Rs. 20 per month only. For further information, contact your DTH or cable operator.

Zee Telugu is the Telugu General Entertainment Channel of Zee Entertainment Enterprises Ltd (ZEEL). Launched on 18th May 2005, Zee Telugu was the first entrant from Zee bouquet to enter South India. Zee Telugu offers a variety of shows that cater to the entertainment preferences of over 75 million Telugu audiences across India every week. From fiction shows to reality shows and talk shows, the channel has multi-genre offerings and is widely accepted as the ultimate entertainment destination. Zee Telugu creates unique content by offering fiction shows with amazing storylines, state-of-the-art non-fiction shows & events with extraordinary formats, and acquires satellite rights to some big Tollywood movies that appeal to viewers across age groups.