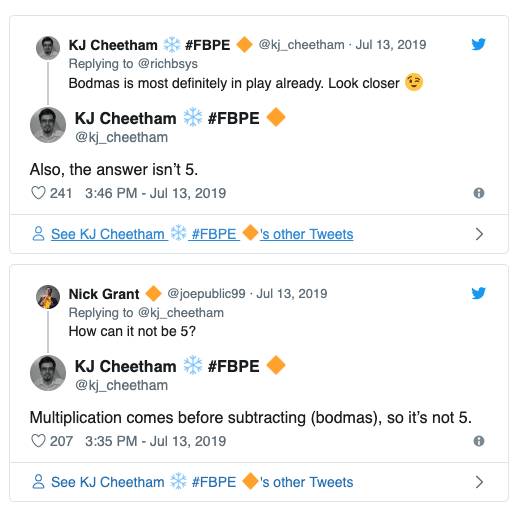 A viral math equation is trending and confusing netizens, it all started with KJ Cheetham sharing a simple equation 230 – 220 x 0.5 =? He gave the answer as 5! but people on twitter was not convinced. Here is the official tweet from him

You probably won’t believe it but the answer is 5!#maths


Most aren’t buying that as they are of the opinion that 120 is the correct answer to the problem 230 – 220 x 0.5 =?
If you solve it by subtraction 220 from 230 and multiply it by 0.5 the answer is pretty obvious as 5.
It was a huge debate with the original poster muting his tweet and posted the following

Dear all, I'm going to mute my own notifications on this thread shortly, but please remember to think twice before claiming someone doesn't know something, based on a single tweet! ?


Some spoke about BODMAS and said the multiplication should be performed first and then subtraction. Then on looking closer it was concluded that he meant 5! (5 factorial) which is 5*4*3*2*1= 120