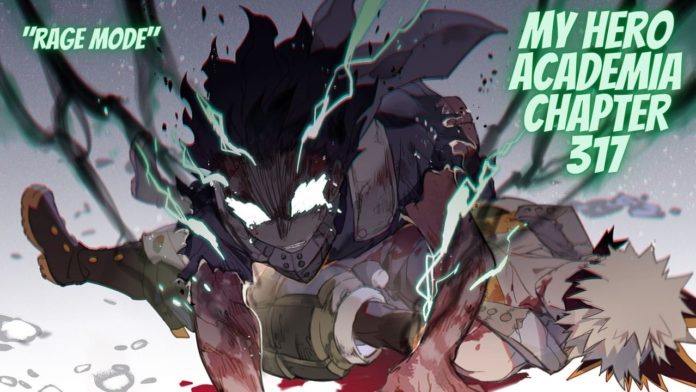 Boku no Hero Academia is on a roll. Kohei Horikoshi’s love letter to classic hero comics is on the 317th Chapter. Let’s see what this chapter will bring. To recap, the entire hero society is in an upheaval Izuku Midoriya (Deku) has taken off to become a hero and to work with his many quirks. Deku has managed to interact with all the previous quirk users of One For All (OFA). We know that he will become the No.1 Hero, that is inevitable, but there is All For One (AFO) who stands in his way.

In the previous chapters, we were introduced to the female villain Lady Nagant. Her backstory and her character popularity have made headlines. Horikoshi has now introduced AFO , who has now officially entered the scene. He has brutally injured Lady Nagant who is unconscious. The other pro-heroes are there to support Deku. Hawks especially came in the right time and saved her from near death.

These spoilers only have some degree of accuracy to them, so take it with a grain of salt. Read ahead only if you want to know the plot points and these will contain major spoilers.

There is a lot of unpack, but there is some consensus. AFO seems to be on the warpath and it is certain that there is going to an epic showdown between the heroes and the villains. Stay tuned while we analyse these aspects!