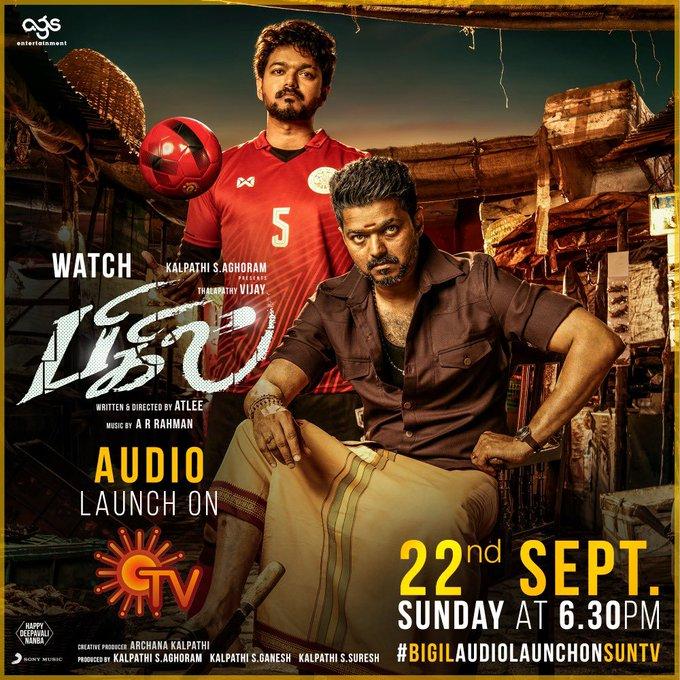 ‘BIGIL’ the most expected movie of the year 2019 will have its audio launch at Sri Sairam Engineering College on Thursday September 19, 2019. This event will not be live telecasted as it’s a weekday but the entire show will be aired on Sun TV on Sunday September 22, 2019. According to the producer of the movie Archana Kalpathi the audio launch cannot be live streamed due to technical difficulties faced and hence aired for fans on September 22 at 6:30PM on Sun Tv. Here is her tweet

The #Bigil Audio Launch is very special occasion for us We wanted to fix a date where the entire cast and crew could come together and celebrate a milestone As it happens to be a weekday a live telecast was technically not possible Thank you for all the support and love ?♥️


The BIGIL audio launch will have live performance by A R Rahman as he is the music director of this movie. Actor Vijay is expected to sing the song “Verithanam” which he has sung for this movie. There will be performances from other singers performing “Singappenney” and the other two songs. Superstar Rajinikanth is expected to grace the BIGIL audio launch. We will have to wait for the official confirmation about the other stars who will be gracing this function. Stay tuned for more updates!!