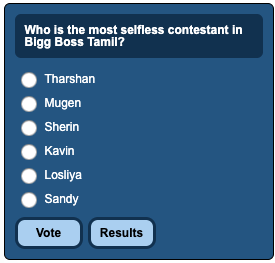 We are just two weeks away from Bigg Boss season 3 Tamil finale, now would be the time to analyse every contestant present in the house. Tharshan shows his selflessness this week by saving Sherin and Sandy by eating raw green chillies. Sandy shows his selflessness when he couldn’t tolerate the fact that Kavin is going against him and everytime something happens he comes and apologise proving he is worthy of being into finale. Mugen showed his selflessness last week when he rushed to help injured Tharshan during the ‘Ticket to Finale’ challenges. He could have just worked on winning challenges but he left it to help Tharshan. Sherin showed his selflessness by being supportive when contestants are feeling down, while Kavin showed his selflessness by saying to Kamal Hassan that he is ready to leave the house for his friends as well as when he rushed to save Losliya (Losliya maybe his girlfriend and hence rushed would be the counter argument). Finally Losliya have always stood for Kavin and sometimes for Cheran, she has nothing much to show other than two incidents. Vote below who is the most selfless contestant? Also comment your views why you have voted for that person.

Who is the most selfless contestant in Bigg Boss Tamil?
Create free online surveys