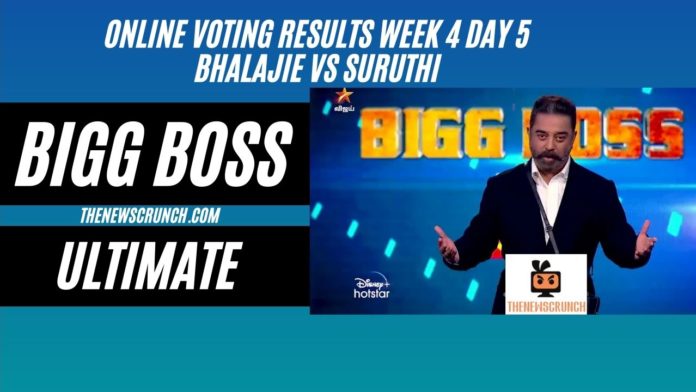 Bigg Boss Ultimate reaches the fag end of the fourth end week as the ‘angels vs demons’ task entertains the audience. Bigg Boss Ultimate currently houses 11 contestants with eight nominations for the week 5 elimination. Vanitha walked out of the house while Shariq, Abhinay got evicted last week. Bigg Boss Ultimate voting results for week 4 indicates danger for Suruthi and Bhalajie.

The nominations list for Bigg Boss Ultimate features a mix of trending contestants except Balaji and Thamarai. Thamarai’s captaincy and performances brought her in contention for the trending player for the week.However, the performances in this week’s ‘Angels vs Demons’ task will be crucial to determine the fate of the seven remaining nominated housemates.