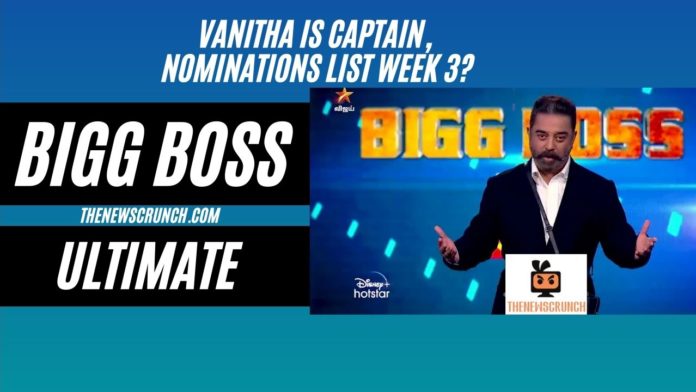 Vanitha won the captaincy task for the third week. After spending a week in safety from nomination, thanks to her ‘trending player of the week award’, Vanitha is saved yet again from nominations.

The housemates are disappointed as Vanitha’s eyes were not properly sealed. The captaincy task involved Suruthi and Vanitha in the top 2 positions. The two contestants competed with their eyes blindfolded and assembling the puzzle with the word captaincy. The housemates alleged Vanitha’s blindfold was not properly sealed. However, Bigg Boss announced Vanitha as the winner of the captaincy task.

Vanitha is the captain of Bigg Boss Ultimate house this week. However, the housemates are not interested to abide by her instructions and boycotted the verdict. Vanitha used this opportunity to gain some sympathy votes by crying it out to Bigg Boss in the confession room.