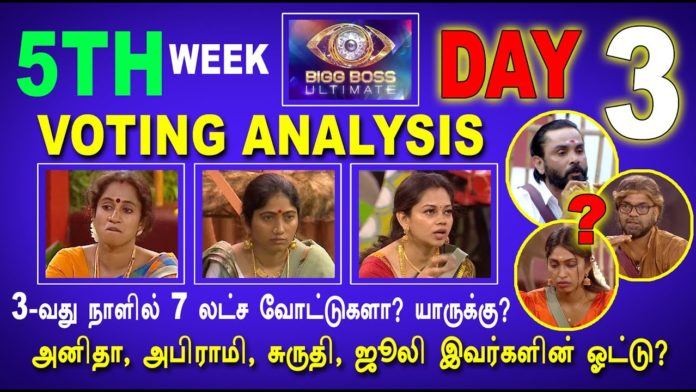 Bigg Boss Ultimate Elimination Voting Details Week 5: Bigg Boss is the biggest hit show aired on Vijay TV on the Tamil silver screen. After season 5 of Bigg Boss ultimate being a huge hit, the makers have organised the OTT version of Bigg Boss.

Who will leave the Bigg Boss Ultimate house this week ?? Voting status released, fans shocked. !!
Some contestants have been selected to participate in the Bigg Boss show as contestants for this show and have experienced it again. And Ulaga Nayagan Kamal Haasan withdrew from the show as the host. Following him, Vanitha Vijayakumar left home due to ill health.

Thus, actor Simbu has been hosting the show since last week. Also, Suresh Chakravarthy and KPY Satish were sent to the show as wild card entries.

It is learned that Snehan, who was included in the nomination list this week, has received the lowest number of votes. Next to him are Dhadi Balaji and Abirami. Who will leave the Bigg Boss Ultimate house this week ?? Voting status was released, and fans are shocked. !!

It has been reported that Snehan or Dhaadi Balaji are likely to leave the show.