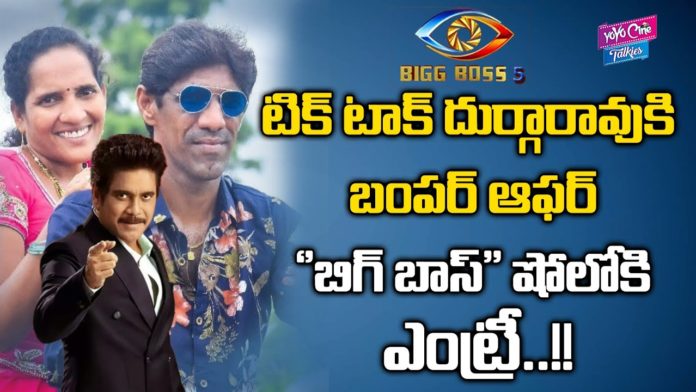 Durga Rao, the TikTok star, has talked about participating in the upcoming season of Bigg Boss. He was the one who responded to these rumors. Along with the TikTok video, Durgarao shined in Jabardast and other comedy shows. He was also seen in the movie Crack recently. He has been offered to participate in Bigg Boss. This coincides with the news that many social media celebrities are offered a chance to participate as contestants in the upcoming season of Bigg Boss.

However, Durga Rao responded, ‘I will definitely go if I get a Bigg Boss offer. In the past, I spoke on a TV channel that I could not go to Bigg Boss without my wife. But now I have changed my decision; I am also ready to go with my wife if we are given a chance to participate.

I have seen all the seasons of Bigg Boss. I will stay in the house for 100 days for the show. If I go to Bigg Boss House, I will try my best to impress the audience.’

The official logo for Bigg Boss 5 has recently unveiled by Star Maa. As the selection process for the contestants is almost done, Bigg Boss will likely start in the last week of this month or the first week of next month. When the news came that Daggubati Rana was going to be the host, they remained rumors. This time too, Nagarjuna is expected to host BB5.

Bigg Boss 5 Telugu vote for week 2 has seven nominations, who will be eliminated?