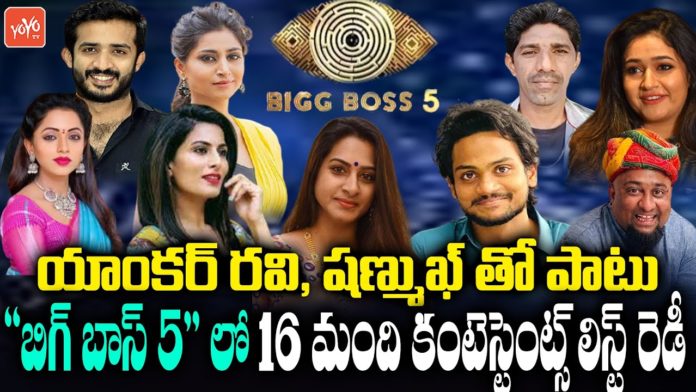 Bigg Boss Telugu reality show is getting ready to hit the screens for a new season. Selection of set structure, arrangement of facilities, selection of celebrities, etc., are going on smoothly. However, various speculations on the selection of contestants are coming to light. However, according to the information leaked on social media and from various reliable sources, the compiled list of confirmed contestants for season 5.

Bigg Boss Telugu reality show debuted as Young Tiger NTR host on 16th July 2017 in Lonavala near Mumbai. The show was a hit as fans loved Jr. NTR as the host; it started with 16 contestants. The season ended on September 24, 2017, with Sivabalaji becoming the first winner to receive a cash prize of Rs 50 lakh. The show lasted for a total of 70 days.

When it comes to Bigg Boss Telugu Season 2 reality show, Natural star Nani acted as the host after NTR left. The show started on June 10, 2018, and ended on September 30, 2018. A total of 18 contestants participated this season. Kaushal Manda stood out as the winner and created a sensation in the history of Bigg Boss. The season lasted for 112 days.

Tollywood Cupid Nagarjuna Akkineni has been cast as the host since Nani left Bigg Boss Telugu Season 3. The show had 17 contestants. The show, which started on September 6, 2019, lasted for 105 days. The show ended on November 3, 2019, with Rahul Sipliganj as the winner. It was seen that Ramya Krishnan was the host for two days in the middle of the show.

Amidst the coronavirus pandemic, the Big Boss Telugu 4 reality show started in September 2020. The show, which lasted 105 days, ended on December 20, 2019. Abhijit Duddala was the winner. A total of 19 people participated in the show. Akhil Sarthak was the runner-up. Samantha Akkineni hosted the show for two days. Chiranjeevi was a special guest at the finale ceremony.

Currently, Bigg Boss Telugu Season 5 is likely to start on 5th September 2021. If all goes well, steps are being taken to start the same day and continue for 105 days. The final is scheduled for December 19. However, this time the selection of contestants is going crazy, with information that top and hot celebrities are trying to be a part of the show.

These fifteen contestants are now officially confirmed for BB5. They will be entering quarantine on 20th August, and the season will premiere on 5th September.