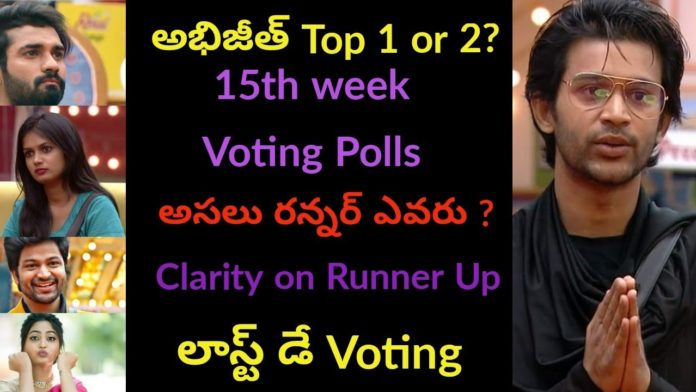 Bigg Boss Telugu season 4 is inching towards the finale as the final five contestants of this season are battling it to win the Bigg Boss title. The organizers show all the Bigg Boss finale contestants’ journey to garner support from their respective fans. In yesterday’s episode, they were showing the journey of Harika, Ariyana, and Sohel. This was mainly for the fans to recollect about the contestant’s performance to vote on the final day.

On this occasion, Bigg Boss called the top 5 contestants one by one and showed them their hundred-day journey.

Abhijeet clearly appears to be the winner according to unofficial polls across various web portals. Abhijeet has a great online presence, and his fans are voting for him through the Hotstar app and miss call number.

Ariyana, Sohel, and Akhil will be fighting for the runner-up spot, which will be a close call. Fans of all these contestants will be voting for their favorite ones. It will be interesting to see who will end up as the runner up of this season.

Harika will most likely take up the 5th spot as she has the least voting percentage among the Top 5.

The journey of Akhil, Abhijeet, Harika, Sohel, and Ariyana in Bigg Boss 4 Telugu:

Arranged in the garden area all the objects related to the tasks currently played in the Big Boss House. He first called Akhil and played a video of his journey. Akhil was moved to tears as he showed games with Monal, clashes with Abhi and Sohail’s sacrifices. Akhil once again made it clear that he was playing with effort. He said the victories were not in his hands, but the effort never gave up. I was tempted for companionship, but it didn’t feel very reasonable to want more love when it came to so much love in the form of audience votes. He thanked those who knelt on his knees, saying that the love of the audience was enough. He expressed confidence that Big Boss knew himself and that he was sure to be the winner. He then took a photo of himself on the balcony and entered the house.

Afterward, Abhijeet went to the garden area and took a closer look at the objects in the robot task that brought him fame. Big Boss called him the “Matured Man of the House”. Bigg Boss said he was proud to be in the house of such a mature and intelligent contestant. Abhi raised her hand and nodded. “I think coming to Bigg Boss is the right decision in my life,” he said. Abhi was mesmerized when he was later shown the Journey video.

The video mostly shows the chatter with Abhi Monal. In it ‘Do you like me?’ Asked Abhi to Monal. Monal did not respond but then said ‘I like you’. But due to the changed circumstances, the distance with her, the clashes with Akhil, the nominations all showed. Harika also recalled the circumstances that accompanied him. Abhi was shocked to see all this and was very happy. He then took a photo of himself and went inside.

After watching the entire video of her journey in Bigg Boss House, Harika showed her mannerisms by waving her hands as usual. She said “No words Bigg Boss. I do not understand how these 14 weeks have passed, Learning every day. Very useful for my life. Bigg Boss is a major role if I make an innumerable epic life history tomorrow or not. My Fight Is Over seems to have become very emotional after watching this video.” Bigg Boss then steps up to the elevation lights given at the end. Harika then appealed to fans for support.

Bigg Boss says Sohel Journey is so awesome. ‘Sohel you started the journey as the troubled next door in this house .. but by the time your journey was over everyone in the house had gained the admiration of everyone who looked after you. This journey showed everyone all the emotions that are in Sohel‌. You are ready to do anything for friends with the delicate heart you have.

You have shown a new meaning to the word friendship with your love. Your every emotion is so purely true. So the audience made the journey with you laughing and crying. Bigg Boss and the audience loved the journey in which you made many sacrifices and made the right decisions. Bigg Boss salutes his energy for playing the game. It’s not going to stop here as you said. Your story will be different for your hard work and talent, ‘said Bigg Boss, who said wonderful things about Sohel. After watching his video, Sohel cried emotionally and appealed to his fans to support Bigg Bossss Title.

Bigg Boss tells the story of Ariyana Glory’s emotional journey as she enters the house of Bigg Boss as a bold anchor. ‘Ariyana has been a sensation since you entered Bigg Boss House .. You have not slowed down from the first day you entered this house till today .. Wanted to win the game from day one. Stand out with your energy. Always played within their own range with their own rules.

In some cases, you are lonely .. Everyone is on your side .. No matter how many obstacles you face without compromising, choose your destination as your target and do not lose your courage .. Go to the drug like a wild horse .. Many dreams come true. Day by day the real game in you is revealed. That’s why Shining Star Ariana is here today. Bigg Boss wants to get the right result for your hard work .. Bigg Boss showed Ariana Life Journey.

Ariyana was emotional after watching her video. She said Bigg Boss gave her an unforgettable place in her life and gave her recognition among fans. Thanks for recognizing the name given to me. Ari7ana was so emotional that she said she would never forget Bigg Boss. In the end, Big Boss congratulated Ariyana, and she appealed to her fans to vote.