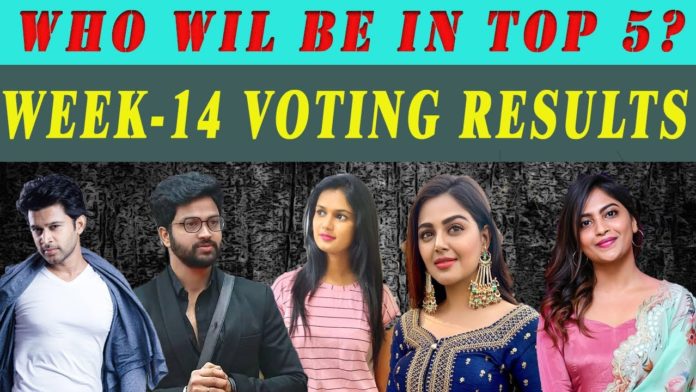 Bigg Boss Telugu Season 4 will complete its fourteenth week with the finals just around the corner. With just six contestants in the house, the final nominations task for this season of Bigg Boss Telugu took place with much vigor. All the five contestants except for the ticket to finale winner, Akhil were nominated for eliminations this week. One of them will be eliminated in the weekend episode hosted by Nagarjuna.


Update: Ariyana Glory is in full glory in the voting results this week. Her performance in the task has raised questions about whether Sohel deserves to be a runner up as predicted before. The battle for elimination tilts towards Harika and Monal on the final day of week 14 voting.

This week’s elimination voting results will be a crucial one for Sohel and his fans. After an aggression filled week for Sohel, his vote share dropped considerably and hatred spread on social media. Hence, Sohel’s bullying is taking the limelight after his weeks of hard work are forgotten. While Abhijeet steers clear of the rest of the nominations yet again, the real contention for runners up is between Ariyana and Akhil now.

As a result of this fight, the real fight for elimination this week will be between Harika and Monal. Sohel is also in danger but compared to Harika, he gained some vote share on account of his loyal fan base. Monal’s support was shrinking over the last couple of weeks and it is quite evident from the first two days of voting results this week.

According to reports, there could be a very close competition between Monal and Harika this week which will decide the top five contestants of the house.