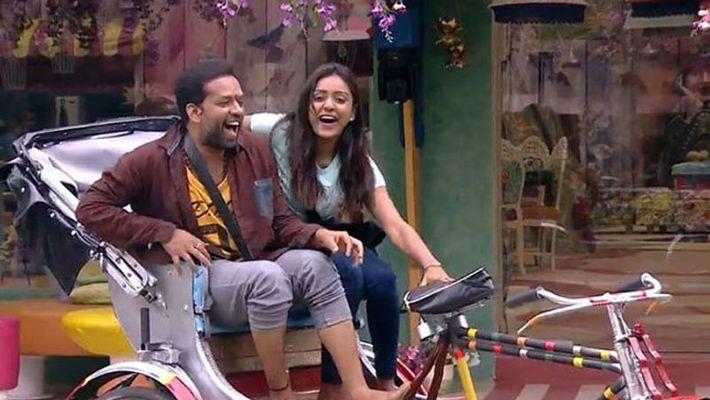 Bigg Boss Telugu 3 entered its 76th day today. The drama, chaos, controversies and action continues in an eventful week. The Battle for the Medallion reached its final leg. Baba Bhaskar and Vithika were fighting for the Medallion Battle victory.

The task assigned by Bigg Boss to Vithika and Baba Bhaskar was quite interesting. The duo had to spend time in a rickshaw until they are unable to sit there. In the meantime, the other contestants tried to disturb them by feeding them chillies, juice and so on. However, the task took an interesting turn when it continuously rained and Bigg Boss asked them to remove their sweaters and drink Appy Fizz.

The task took a stunning twist when Baba Bhaskar was turning away from Vithika and she pushed him down from the rickshaw.

Vithika justified it with the fact that he was getting unfair advantage of passing urine from the rickshaw and she was against it. Vithika claimed to agree to be disqualified if Bigg Boss says so.

However, Bigg Boss granted the verdict in Vithika’s favor and Vithika became the winner of the Battle of the Medallion. It would be interesting to see what powers are acquired by Vithika after winning this event.

Though Vithika justified her actions, Baba Bhaskar and Sreemukhi’s fans are disappointed at the outcome. Throughout the task, Baba Bhaskar adjusted to Vithika’s comfort and gave her a lion’s share in the cramped seat of the rickshaw. As Baba and Vithika battled it out through chillies and rain, the end to the task did not go well with the audience. The fans of Baba Bhaskar also blamed Varun and Vithika for playing a joint game. They accused Varun of influencing Vithika position in the house and helping her to be safe no matter what happens to others.

Did Vithika Do the Right Thing By Pushing Baba Bhaskar Down to Win the Medal? Vote Now!

Did Vithika Do the Right Thing?