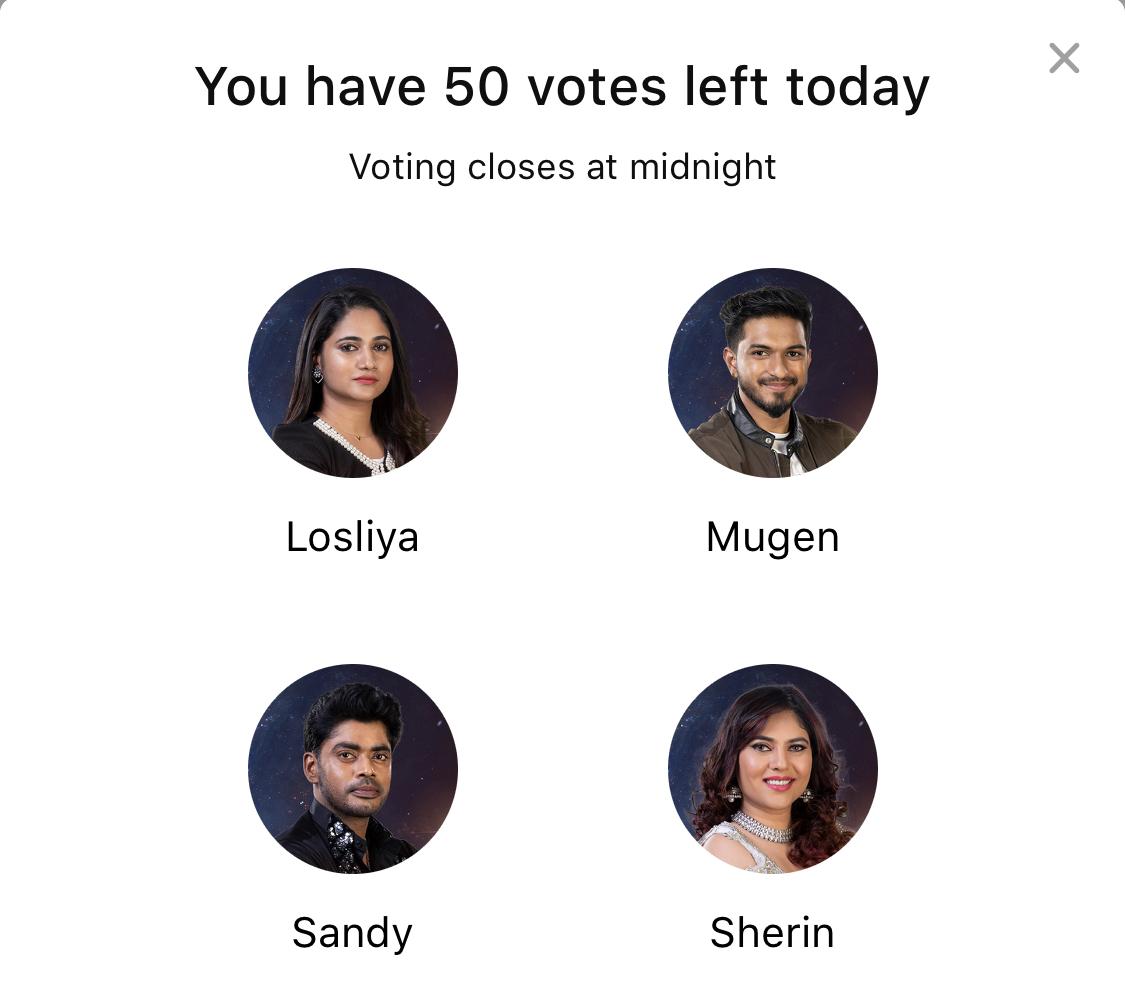 Bigg Boss 3 Tamil final week is in progress with lots of twists and unexpected changes. Today October 3, 2019 marks the day 3 of voting and here is an update and live status of voting results till today for Title winner of Bigg Boss season 3 Tamil. We expected it to be a cakewalk for Mugen as he was leading the voting results till yesterday but there is a huge change is voting percentage with Losliya and Sherin catching up.


How did Losliya gaining Votes to beat Mugen for Title

Losliya’s fan aka Losliya Army were sleeping till yesterday and suddenly they have woken up and along with Kavin’s army they’re making the impossible happen. They’re slowly catching up to Mugen with the percentage gap between Mugen and Losliya decreasing. This is due to the magic created by Kavin’s fans, they’re voting for his girlfriend and we expect Kavin at some point to re-enter into Bigg Boss house and help her to gain more votes. Also there are people from Malaysia who are supporting Mugen online in Twitter, Facebook which makes it appear that Mugen is leading the vote but in reality these are not converting to real votes as they’re not able to vote from their country for Mugen.

Vanitha helping Sherin by making her a victim

The surprise part of the day is Sherin catching up to Sandy with Vanitha helping Sherin by alleging that because of her Tharshan has lost the title. This makes Sherin really sad and she was seen crying throughout the day. She can be seen crying right from morning’s promo video which has created sympathy among people. People are seen voting to her instead of Sandy. Even though Sherin doesn’t have an army she seems to be gaining votes due to these issues in her favour. If Tharshan appeals to people for Sherin then it would turn the table and there maybe chances that she would end up winning the title or atleast runner up.

Who will be the top 3 in Bigg Boss 3 Finale?

There seems to be a constant shift in top 3 finalists in this week with Mugen leading as of today, Losliya slowly catching up while a fierce battle has emerged between Sandy and Sherin. This would be a tight call as anything can happen this week and we expect it would go down the wire.

This is not the final results as it gets updated depending on people’s vote. We will update tomorrow on today’s results, make sure to vote for your favourite contestant via HotStar App and also in our unofficial poll to get more data for analysis.

Who will win the Bigg Boss 3 Tamil title?
Created with QuizMaker Online
Loading...