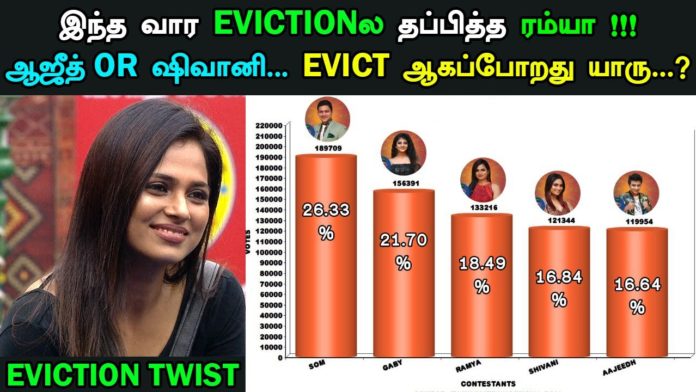 Ramya Pandian’s brother Parasu Pandian had come with his mother from Dubai to see his sister Ramya inside Bigg Boss house. Parasu, who was joking with everyone inside the house, comforted Ramya that she might be the one who gets evicted this week. Ramya was shocked to hear this, but Parasu assured her that it was not her fault if she got evicted.

Parasu said that there could be a double eviction this week. Suresh Chakraborty, Sanam, Archana, and Anita are the other strong contestants from the Bigg Boss house. Ramya’s brother’s statement that Ramya may go out this week in this condition has come as a shock to the fans.

This week’s nomination list includes Shivani, Ramya, Aajeedh, Somasekhar, and Gabriela. Aari is not on this list because he is the captain of the house. Similarly, Balaji and Rio did not make it to the nomination. Maybe if there was a double eviction, which of these was going to get out? The latest unofficial polls show it might be a close call between Ramya, Aajeedh, and Shivani.