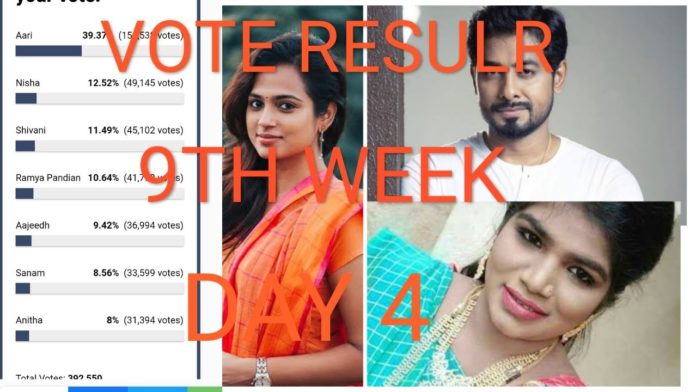 At the end of the of 9th week of Bigg Boss 4 Tamil, One contestant has to be eliminated from the show. the show has completed almost 60 days and yet there are 14 contestants in the house. According to some reports, Suresh Chakravarthy might give a re-entry as a wild card contestant. However, yesterday’s episode for prolonged due to the 1-13 arranging task based on the performance in the Call center task. From the audience point of view, Anitha did not receive proper justice for her stand.

Aari owns the voting poll with immense number of votes compared to the other contestants. Following Aari, Nisha has the second most votes closely followed by Shivani.

According to the unofficial voting results, At the end of 5th day voting Anitha seems to have the least votes closely followed by Ramya Pandian which is a shocker.

If Nisha is eliminated from the show, It will be a game changer for the “lovebed” gang which include Rio, Som, Archana, jithan Ramesh and exclusively Gabby.

The audience have only a day more to cast their votes. The voting poll closes tonight. Follow the given instructions to vote for your favorite contestant.