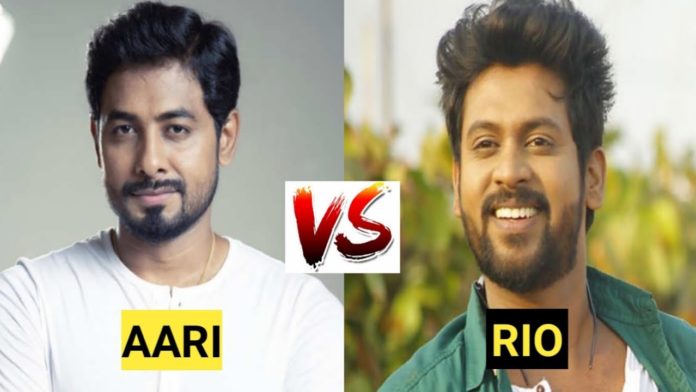 Bigg Boss Tamil 4 gears up for a fiery finale week as the contestants grapple to save themselves from the final eviction this weekend. However, there is a suspense around the ‘ticket to finale’ winner as well. Considering just a week of entertainment left in its kitty, the buzz around the title winner of Bigg Boss 4 Tamil is making waves.

Rio, Aari and Balaji are top contenders for the title winner position in this edition of Bigg Boss Tamil. However, the audience are a divided lot and wish to see a stiff competition till the end. There are considerable speculations on social media pertaining to Star Vijay’s contestants getting an edge in the reality show. Hence, Rio Raj is a strong contender for tht title winner position.

Rio vs Aari – Who Deserves to Be the Bigg Boss Tamil 4 Winner?

Rio Raj was a prominent face in the house right from the first day. He was an integral binding force in the ‘Anbu gang’. He was accused of ‘groupism’ and ‘favoritism’ through the course of the season. He stood his ground, played diplomatically, and waged his way into the finals. Rio was a strong performer in tasks and gave his best. He wished to entertain the audience but played a very safe and conscious game throughout the season.

Rio never broke out of his shackles nor did he let anyone break his fragile positive image inside the house. Audience felt Rio plays for the camera at all times and that played down his popularity. Also, the ‘Star Vijay’ tag to Rio makes him a strong choice but if Rio wins, the audience will be disappointed with the ‘biased decision’.

Aari Arjuna was a ‘people’s crusader’ right from the first day. He stood his ground for what he believed was right. He fought individually, received lashes in the form of abuses, allegations and hate filled comments. Aari stood strong like a pillar and the rest of housemates felt insecured around his popularity. Aari Arjuna’s army is working in a formidable scale and he looks unstoppable.

However, the most popular contestants did not make it to the winning position in several editions of Bigg Boss Tamil. Hence, the chances of Aari winning the title are bleak. Win or loss Aari will walk out of the house with his head held high.