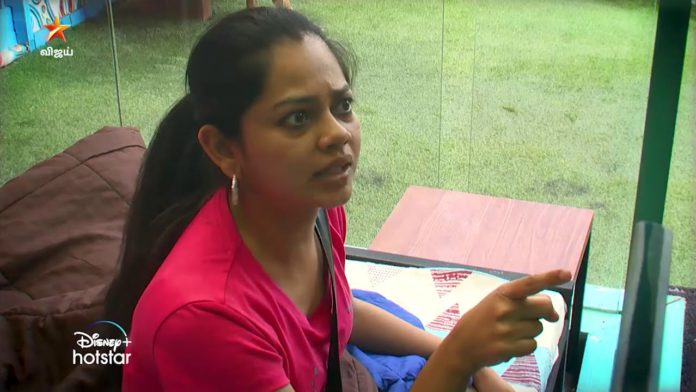 Anitha and Ramesh were then selected as the worst performers. Following this, Anitha lamented to Ramya before going to jail. ‘I was the one who worked the most on the kitchen team throughout this week. I also excelled at the captaincy responsibility given to me. Am I the worst competitor of the whole week for not doing well in just a few places?’ Anita lamented to Ramya.

Anita went to jail, lamenting that there is a whole number game in choosing the worst rivals and that their goal is to get rid of players who are unique and that Sanam Shetty is playing, intending to get me out next.

Kamal Haasan is expected to spin his whip tomorrow as the Archana Group has not changed. Kamal Haasan has already repeatedly stated that personal preference should act like a nomination foil when choosing the worst and the best contestants.

Netizens have come in support of Anitha and are tweeting:

#Aari nominated #Nisha for best performance and after sometime he is telling Nisha should come in worst performer to #Ramya.. Is #Aari double minded or Fake or he is influencing other contestants?? @ikamalhaasan #BiggBoss4Tamil #BiggbossTamil4 #biggbosstamilseason4 **PROOF** pic.twitter.com/lzHTlvC6Fi

The Game changer of the Season! Right from nomination topple card, this week winning captaincy, and yesterday putting points forward against groupism boldly which is going to gain her more votes next week! Way to go Anitha❤️ Not a fan!#BiggBossTamil4 #Anithasampath pic.twitter.com/Y1XPvKhTAP

@ikamalhaasan sir please ask about this to Rio sir. He is playing only for his gang and save them too..
These Vel gang😤.
P.s. video clip taken from a social media source.. #BiggBossTamil #BiggBoss4Tamil #BiggBoss2020 #ComaliRio #Anitha #aari @Shivakumarr222 @Aariarjuna pic.twitter.com/AKrM07UI5I

#Ramya on point🔥🥳👏 she never rise her voice unwanterdly if she rise her voice that's had some valid points and logic 👏🔥proud to support u my girl🔥👏👏💥😎 #RamyaPandian #bigbosstamil4 #Anitha pic.twitter.com/z3JFG3LT0J