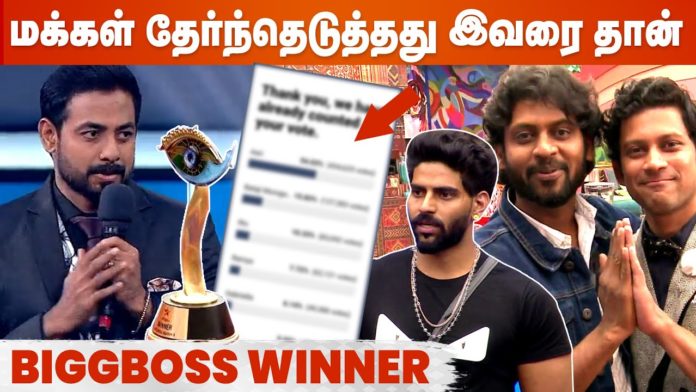 Bigg Boss Tamil 4 is all set to draw curtains on a rollercoaster season filled with fights, drama, and emotional moments. Sunday’s ‘Grand finale’ episode will unveil the title winner of Bigg Boss 4 Tamil. Five finalists are in the Bigg Boss house and the host Kamal Hassan will grace the stage.

The ‘Grand finale’ episode of Bigg Boss 4 Tamil will be a grand event taking place for six hours on the trot. It will feature special guests, performances from evicted contestants, and the much-awaited title winner announcement for this season.

All the evicted contestants were in quarantine and are expected to grace the ‘Grand finale’ proceedings with host Kamal Hassan. However, the five finalists are in for a nail-biting finish on Sunday.

Somshekar will be the first finalist among the top 5 to leave the Bigg Boss house. The ‘ticket to finale’ winner made his presence felt in this season of Bigg Boss Tamil 4.

Ramya Pandian will be the second finalist among the top 5 finalists to be evicted. After being a prospective winner, Ramya’s stature diminished after tussles with Aari Arjuna. However, she will leave the house with her chin up during the ‘Grand finale’ episode.

Rio Raj will be the second runner up of Bigg Boss Tamil 4. It was a rollercoaster ride for the Star Vijay star. He survived all the odds and performed well during tasks. However, his dip in morale during the finale week cost him the first runner up slot.

Balaji Murugadoss will be the first runner up of Bigg Boss Tamil 4 according to reports. Balaji was a warrior in the making but his temper dug the grave and hence, he fell short of the title winner position. Nevertheless, we expect Balaji to shine in the Tamil entertainment industry.

Aari Arjuna will be the title winner of Bigg Boss 4 Tamil. From the first day, Aari was a strong finalist contender and today, he grew in stature. Wading off eleven nominations, fighting through four jail nominations, Aari’s fans stood beside him. Aari Arjuna won the title will a whopping vote share margin.