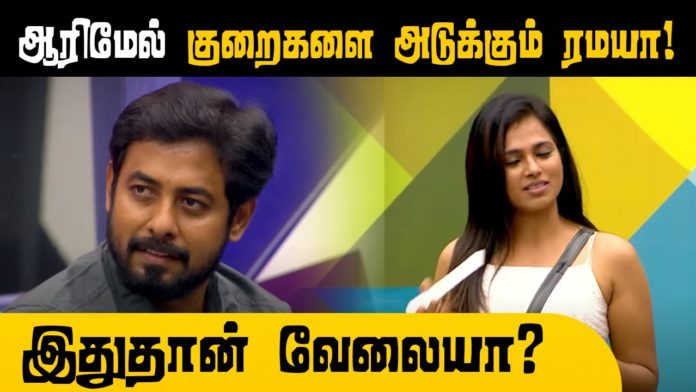 The ‘Ticket to finale’ task, which is taking place this week at the Bigg Boss house, is nearing completion. Somshekar and Rio are already in the top with 32 points after 7 rounds. Balaji follows it in second place with 30 points.

At this point, the 8th round is currently underway. This is probably what is expected to be the final round. It is announced that a phrase will come to everyone, and the task is to tell who exactly that phrase applies to. After Ramya gets the sentence ‘Live with the nation’, she tells Aari as expected. She says he has a disagreement with seven of the eight people in the house and that he may have lived with them despite such disagreements, but he did not.

This is followed by the phrase ‘renounce and live’ for Balaji. He also gives it to Aari. ‘Although I did not like Aari’s style of play, he will forget about the fight as soon as he and I disagree. Even if he fights this morning, he will immediately forget about it and talk to me in the evening’. Balaji spoke in support of Aari, explaining that he will forget it and speak no matter how much suffering comes.

It is noteworthy that Ramya continues to show her opposition to Aari despite Balaji speaking in support of Aari in today’s task. Will Ramya gets evicted for speaking against Aari? We will have to wait and watch this weekend.