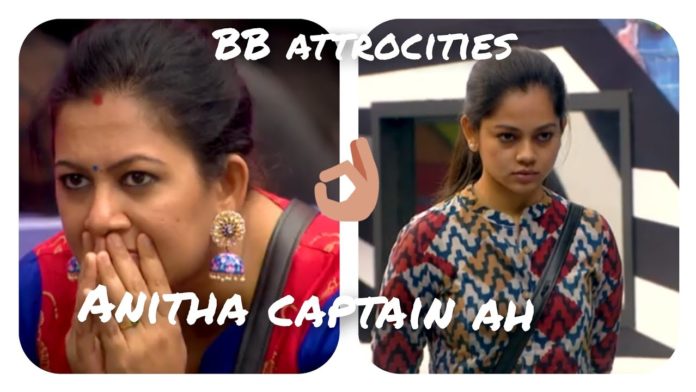 Anitha shed tears as Sanam Shetty was evicted from Bigg Boss 4 yesterday. Sanam Shetty had a lot of support not only at the Bigg Boss house but also outside. So fans are now questioning how she was eliminated when they voted for her.

This aside, the first promo video for Monday 7th December is out today. There is a competition going on this week to select the captain. Usually, only three competitors will compete in the captaincy task.

But this time, it has been announced that all the contestants at Bigg Boss house will contest captaincy. Big Boss said that some photos will be displayed on the screen and only those who answer the questions asked about it correctly will win.

Anitha has won by beating everyone in it. As she was announced as the captain of the Bigg Boss house this week, she was surrounded by other contestants and applauded. When the Elimination took place yesterday, Anitha was in a sad mood as she was about to leave. For that, she had packed all her belongings. She also had coins in her hand, which is handed over at the time of eviction. But she was shocked when it was finally announced that Sanam Shetty would be leaving.

She hugged her and cried. Although Sanam went out happily, it was Anitha who shed the most tears thinking of her. We ourselves were upset when we saw her shed tears. It looks like Anitha is safe from this week’s elimination list as she has been selected as captain today.