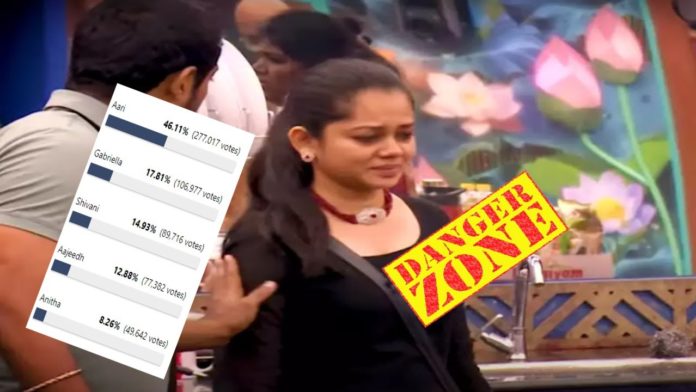 [Opinion Post] Bigg Boss Tamil Season 4 is progressing at a phenomenal pace and the audience is enthralled with the latest developments in the house. The last three weeks were excruciating for the contestants with double evictions, surprise tasks, and all nighter luxury budget task. Bigg Boss Tamil 4 will complete its 12th week this weekend and there are eight contestants in the house.

Five contestants were nominated for the evictions this week and Anitha is at the bottom of the pile. Aajeedh is in the fourth position but Anitha’s vote share is considerably low since the first day of voting. This is a common phenomenon across social media platforms.

End of Bigg Boss Tamil Journey for Anitha, Here’s Why:

Anitha Sampath entered the house with a very jittery attitude and she took her time to settle. She was annoyingly conscious about the camera and what would be telecasted. Her gameplay was overshadowed by what the audience might think compared to what she wished to accomplish.

Anitha stood out as a strong contestant after she won the captaincy task which put immense pressure on the ‘love bed’ gang. However, the next week earned her accolades even though she was sent to jail as she spoke out for herself.

The following week pitted the downfall of Anitha’s journey in Bigg Boss Tamil. Aari and Anitha were considered as the individual players in the whole season so far. Anitha Sampath locked horns with Aari Arjuna and her arguments did not go well with the audience.

Anitha’s defensive nature is another reason for her potential eviction this week. The audience got annoyed with her mentality to defend blindly against anything that is said against her. Anitha openly confessed to not knowing how to wash the bathrooms during the task assignment. Considering her struggles in life, the audience found it hard to understand if she is falsely projecting her struggles to woo the audience’s sympathy.

Aari Arjuna never spoke ill of her family members but yet again Anitha jumped up a step to prevent him from talking about her demotivated nature. However, Anitha called it a personal talk but in Bigg Boss house, nothing is personal and that is the reason for cameras being placed everywhere.

Anitha’s bold nature was commendable but beyond a point, she put her entire weight on the same. Her recent arguments with Aari or Balaji were irritating and there was a huge dissent on social media against her actions. Nevertheless, Anitha overstayed her tenure in Bigg Boss.

With Anitha’s eviction this week, questions will be raised if Shivani and Aajeedh were more deserving compared to the bold and outspoken news reader who made a mark for herself in Bigg Boss Tamil 4.

Inspote of putting lots of efforts in BB, her irritating behaviour is going to cost her journey 🤕#BiggBossTamil4 https://t.co/NIU6WQZ6ZV