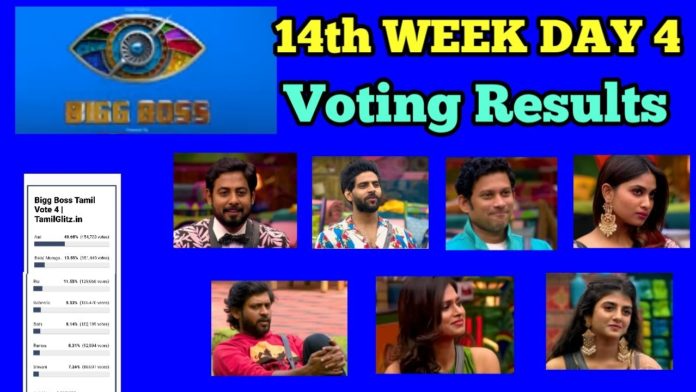 Bigg Boss Tamil Season 4 is all set to complete an eventful fourteenth week. All seven contestants were nominated for eliminations in final week 14 of Bigg Boss 4 Tamil. Twelve eliminations took place so far and Aajeedh was the last contestant to be evicted. Intense and painstaking ‘Ticket to finale’ tasks took place on the final day (Friday) which involved great performances from Ramya, Shivani, and Somshekar.


The ‘Ticket to finale’ tasks and influence from outsiders, pressure to enter finale week is impacting the voting results by considerable means. Shivani and Ramya continue to struggle around in the last two positions from the first day and Somshekar’s ‘Ticket to finale’ victory adds to the pressure on the two.

This week’s voting results saw healthy competition in voting as the top contestants like Aari, Rio, and Balaji were in nominations. Aari dominated the voting results from day 1 while Balaji was in a distant second position. The presence of all three contestants from the ‘love bed group’ gives the audience a week to shift focus on Ramya and Shivani.

The ‘Ticket to finale’ tasks was the major decisive factor for this week. Shivani entered the elimination battle this week though she was not nominated and is trailing. Unfortunately, she will be evicted thanks to her poor voting results.

According to reports, Aari, Rio, and Balaji are likely to be safe this week.

According to reports, Ramya Pandian and/or Shivani are likely to be evicted this week.