Bigg Boss Tamil 3 had an amazing and cheerful day, thanks to the presence of ex-contestants Yaashika Anand and Mahat. The contestants are all in a very friendly mood considering the limited time left in the house. Is it the end of controversies and fights in Bigg Boss Tamil 3? Only time will tell.

As Mahat and Yaashika spent time with the contestants, Bigg Boss asked them to distribute some gifts for each contestant. Mugen got a mike, Sandy got a chef’s hat and Losliya got a photo frame of her dad.

However, Sherin was given  the task of writing a letter (love letter) and Bigg Boss promised it won’t be read by anybody or the intended recipient.

Sherin was very excited and started writing her letter with a smile. A few lines in the letter read, ” You are the sunshine on my cloudy day”. It is predicted that Sherin’s letter was a poem.

However, after sometime Bigg Boss instructed Mahat to hand over Sherin’s letter to whomever it was written for.

Sherin was shocked and she ran to her bed and tore the letter.

Whom Did Sherin Write the Letter For?

Popular speculations are that Sherin wrote the letter for Tharshan. Considering Tharshan was also interested in reading the contents of the letter, are Sherin and Tharshan hiding their feelings for each other? Also, if it was not a cheesy love letter or something which cannot be expressed in the show, why did Sherin tear it before anybody could see? 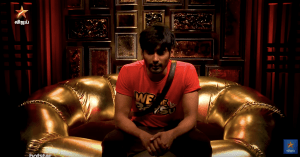 If the letter was not written for Tharshan, is Sherin having a secret crush in Bigg Boss Tamil 3 house. Why is Sherin hiding her feelings if it was not something wrong?

Is Sherin playing the game just like Kavin and Losliya by trying to gain camera attention ? Let us know in the voting below.

Balaji sleeps through the 45-hour task in latest promo. Watch