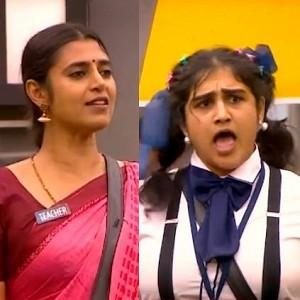 Bigg Boss Tamil Season 3 gears up for its eighth elimination this weekend. Since today is Day 59 in Tamil Season 3, with just 40 days left, this is one of the most crucial eliminations of this season.

Is Sandy the Weakest Link in “The Boys Group”?

Sandy, Tharshan, Cheran and Kasthuri are nominated for eliminations this week. There are lot of speculations about Sandy’s elimination this week. The audience is disappointed about Vanitha’s exclusion from the nominations this week. Apparently, a lot of contestants who wished to nominate for Vanitha ended up with Cheran as they didn’t want to disturb “The Boys Group” unity. Considering Sandy to be the weakest link among the boys group, he stands a fair chance of being eliminated this week.


As per the latest reports on the audience vote counts, Sandy tops the list with the highest number of audience votes in his favor. He is closely followed by Tharshan and Cheran. However, Kasthuri is trailing by a considerable margin. If at all audience votes is the only factor in deciding the eighth elimination this week, Kasthuri will be eliminated. However, the elimination of Kasthuri will not have a huge impact on the house proceedings as she failed to create any impact from the day she entered as a wild card entry. Lack of credible connections in the house, lack of respect and authoritativeness, inability to make people believe her right intentions are all the factors which might drive Kasthuri out of Bigg Boss Tamil Season 3.

Audience Votes Count for the Eighth Elimination (As of Today)

Find out how to vote for your favorite contestants here: Eighth Elimination Voting Bigg Boss Tamil 3

Do you think Kasthuri will be eliminated this week in Bigg Boss Tamil 3? Let us know in the comments below.