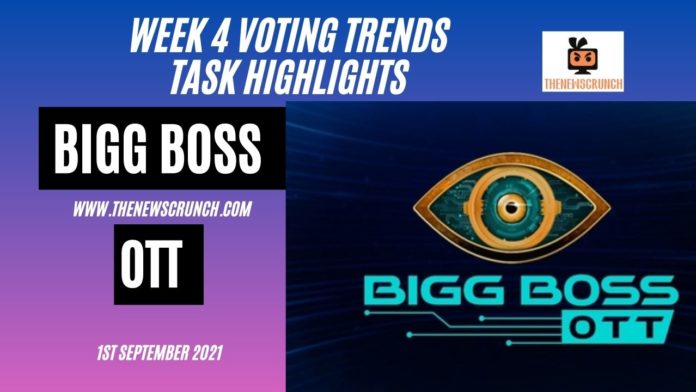 Bigg Boss OTT enters its fourth week as the draining ‘clock time task’ commences. Four contestants got nominated for eliminations this week. However, Nishant was saved by the audience. As a result, Divya, Milind, and Akshara are fighting the voting battle ahead of eviction in Bigg Boss OTT this weekend.

The third elimination of Bigg Boss was Zeeshan after his fight with Pratik. However, there was no eviction in last week’s Sunday Ka Vaar which gave a moment to breathe for Milind and Neha Bhasin. It was quite intriguing to see the performances of the clock task.

The episode on Sunday Ka Vaar will feature the prelude to the suspense around the fourth elimination of Bigg Boss OTT. The voting results were fun to follow as all the contestants were nominated for eviction this week. However, the audience took the upper hand in deciding the fate of the second elimination.

The bottom contestant for this week’s eviction is:

However, there are high chances of Gabba’s eviction from Bigg Boss OTT this week.