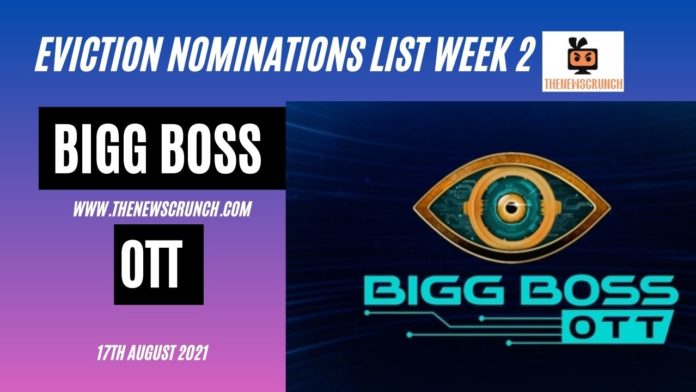 Bigg Boss OTT begins its second week on a very promising note. The Bigg Boss 13 heartthrobs, Siddharth Shukla and Shehnaz entered the Bigg Boss house with a spicy task. Divya and Neha Bhasin were among the bottom two for the ‘housebreaker’ nominations. However, the nominations list for week 2 took the center stage as one elimination was completed in the show.

The popular contestants of the house were in danger of elimination this week. However, Ridhima announced this week’s ‘Panchayat’ task for the nominations. Every time a gong sings, a new discussion begins. Rakesh and Shamita play the role of the judges.

The first discussion was about the most ‘kamchori’ connection. Boss Man and Boss lady, Raqesh and Shamita listened to the arguments of the housemates. Ridhima made a strong point to nominate Nishanth for being the laziest person in the Bigg Boss house. Nishanth and Muskan’s connection will get nominated only if the audience approves it according to Bigg Boss. Zeeshan and Divya got nominated as a result of the incorrect decision.

However, the next pair to take a decision was for the most unhygienic connection. By nominating Moose and Nishanth again, Karan and Ridhima got nominated for the wrong decision.

However, the audience’s decision swung towards Ridhima and Karan for the nomination. In an interesting twist, Bigg Boss nominated all the contestants of the Bigg Boss house for nominations this week. This includes Shamita and Raqesh. However, it would be interesting to see who will be eliminated this week.

As of Tuesday, only four contestants are nominated: