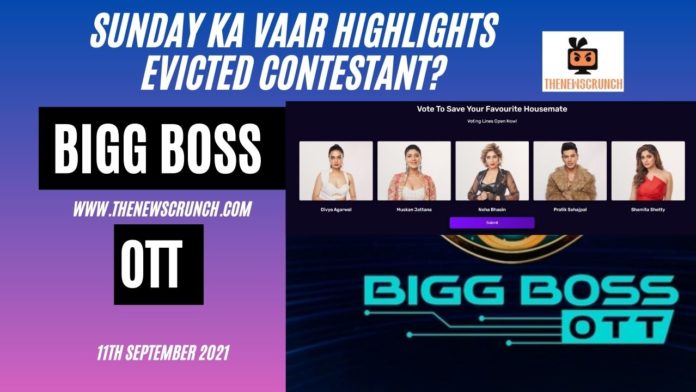 Bigg Boss OTT completed its penultimate filled with heartbreaks, fights, and chaos during tasks. The fifth week of Bigg Boss OTT witnessed the breakage of connections while individual play commenced. While the house boils, the Sunday Ka Vaar episode will ensure an eviction takes place in the Bigg Boss house this week. Akshara and Milind were eliminated in Bigg Boss OTT last week.

Five contestants were nominated for eliminations this week. However, none was saved by the audience. As a result, Pratik, Shamita, Neha, Muskan, and Divya battle the prospects of becoming the fifth elimination of Bigg Boss OTT.

Akshara and Milind were evicted in the midweek of Bigg Boss OTT last week due to least votes. Neha, Pratik, Shamita and Muskan, and Divya are the five  contestants who are nominated for elimination this week. Out of the five contestants, Neha and Moose’s prospects of elimination are higher.

Shamita was dominating the voting polls ever since the voting window opened second only to Divya Agarwal. Multiple factors resulted in Moose and Neha fighting against eviction. Moose and Neha are the bottom two contestants of Bigg Boss OTT week 4 voting results.

The luxury budget task for this week was performed in two teams. There were multiple highlights during the task including Shamita’s kiss for Pratik. The task is called ‘Dog in the Bone’. The team compositions are as follows:

However, there was no conclusive winner for the Luxury Budget task. Pratik stopped the task yet again and the audience is not happy this time. This is the second time Pratik is involved in terminating tasks especially when he does not have the winning edge.