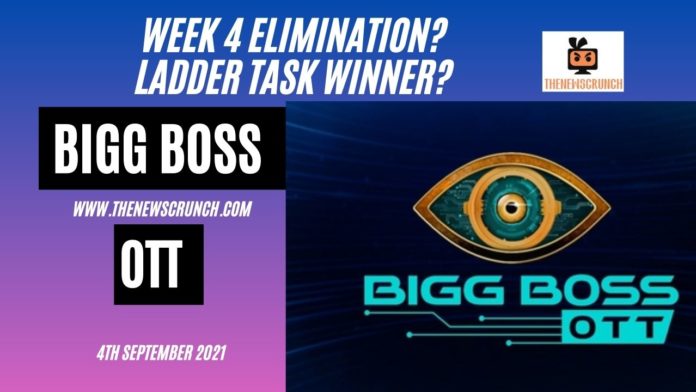 Bigg Boss OTT completed a week filled with surprises, drama, emotions, and fights. The fourth week of Bigg Boss OTT witnessed the entry of a wildcard, Nia Sharma. While the house boils, the Sunday Ka Vaar episode will ensure an eviction takes place in the Bigg Boss house this week. There were no eliminations in Bigg Boss OTT last week.

Four contestants were nominated for eliminations this week. However, Nishant was saved by the audience. As a result, Akshara, Milind, and Divya battle the prospects of becoming the third elimination of Bigg Boss OTT.

Akshara was dominating the voting polls ever since the voting window opened second only to Divya Agarwal. Multiple factors resulted in Akshara and Milind Gabba fighting against eviction. Milind Gabba and Akshara are the bottom two contestants of Bigg Boss OTT week 4 voting results.

This weekend’s Sunday Ka Vaar in Bigg Boss OTT will feature a crackling episode with Karan Johar. Host Karan Johar is also expected to pull up the housemates for their proceedings this week.

The next task for the ‘Boss Man’ and ‘Boss Lady’ nominations take place this week. The task is performed by the following three pairs:

However, there was no conclusive winner for the Ladder Task. Hence, Bigg Boss announced that there will not be any ‘Boss Man and Lady’ nominations for this week. As a result, Milind’s prospects hang in danger this week.