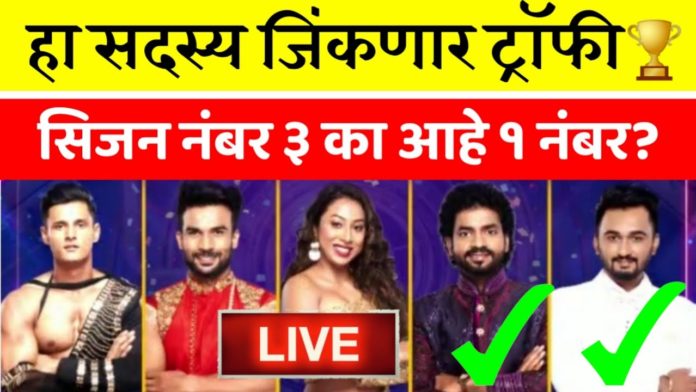 After a journey of 100 days, the third season of ‘Bigg Boss Marathi 3’ has finally reached its final stage. The grand finale of Bigg Boss Marathi will be held on Sunday, December 26. Vishal Nikam, Vikas Patil, Jay Dudhane, Utkarsh Shinde and Meenal Shah are the five finalists. Only one contestant will make his name on the trophy out of these five.

A promo has recently been posted on the official Instagram handle of Colors Marathi channel, and the viewers have reported various reactions to it. Vishal and Jay are the two names that get the most attention in these reactions. The two storms have been under discussion since day one. These two are considered to be fierce competitors. Therefore, it is predicted that Vishal and Jay will play well in the final round.

The door of the house is now about to open. The only difference will be that Bigg Boss will be standing on the other side of the door this time. It is said that these top 2 members will be Vishal and Jay. So it will be interesting to see who will be the winner. The grand finale of Bigg Boss Marathi Season 3 will start on December 26 at 7 pm.