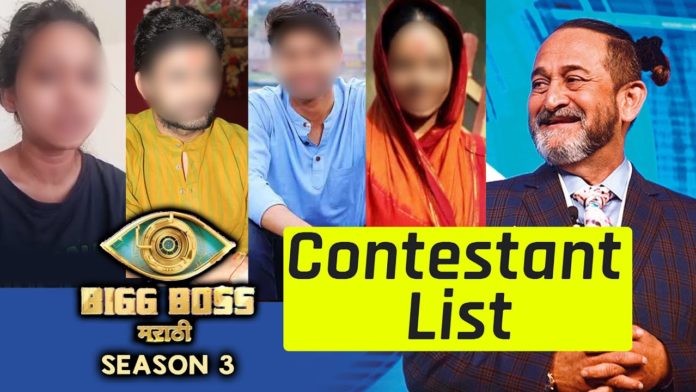 Actress Neha Khan – Popular for her role as ACP Divya Singh in ‘Devmanoos.’ However, the series that started on Zee Marathi and the popular personality in it is considered less likely to turn to Neha Colors Marathi.

Actress Tejashree Pradhan – After the series ‘Aggambai Sasubai,’ Tejashree is not seen on the small screen at present. Tejashree is known as the most fan pages actress on social media. So fans are eager to see her in the house of Bigg Boss.

Actress Akshay Deodhar – Akshay Kamali has become very popular due to her role as Pathakbai, i.e., Anjali, in the series ‘Tujyaat Jiv Rangala.’ Akshay also doesn’t appear on the small screen right now. So the possibility of going to Bigg Boss’s house cannot be ruled out.

Actor Suyash Tilak – While Akshay Deodhar’s name is being discussed, the fact that her ex-boyfriend and actor Suyash Tilak’s name has been taken for ‘Bigg Boss Marathi 3’ is raising eyebrows. Akshay-Suyash never openly acknowledged their relationship. But if the two are seen together in the house of Bigg Boss, it remains to be seen whether the producers will get the expected spice.

Actor Sangram Samel-Pallavi Patil – Sangram Samel and Pallavi Patil are ex couple. The two separated a few months ago. After that, Sangram got stuck in marriage again. Now, if this divorced couple comes face to face in the house of Bigg Boss, Tashan can be seen.

Actress Rasika Sunil – Rasika is my husband’s darling Shanaya. Watching Shanaya will be a visual treat at Bigg Boss’s house. Currently, Rasika does not appear on the small screen.

Actress Ketki Chitale – Ketki Chitale, did not leave much of an impression in series like Ambatgod, Tujh Mein Break Up. Her name was also discussed last time. If she accepts the offer this year, it will definitely help Bigg Boss’s house to get into a controversy.

Actor Chinmay Udgirkar – Chinmay Udgirkar is currently playing an important role in the series Aggambai Sunbai. Earlier, he was hosting the Sakhe Neighbor series on the Colors channel. So it is curious whether Zee will leave the series and return to Colors.

Actor Rishi Saxena – Shiva in Kahe Dia Pardes series. He is in a relationship with actress Isha Keskar. It is important to see if the talisman around the young woman’s neck in the form of a sage will appear in the house of Bigg Boss.

Manjrekar is the host again.

Veteran actor-producer Mahesh Manjrekar hosts ‘Bigg Boss Marathi’. There are many fans of Manjrekar’s style. Therefore, the formulas for the next season will also be handed over to Manjrekar. For the last two years, the audience has been listening to the Marathi voice of ‘Bigg Boss.’

Actress Megha Dhade was the winner in the first episode of ‘Bigg Boss Marathi.’ Shiv Thackeray had carved his name on the second trophy. Now the curiosity about who will be participating this season has increased.

Has Heena Made the Right Decision in the Bigg Boss Marathi Season 2?