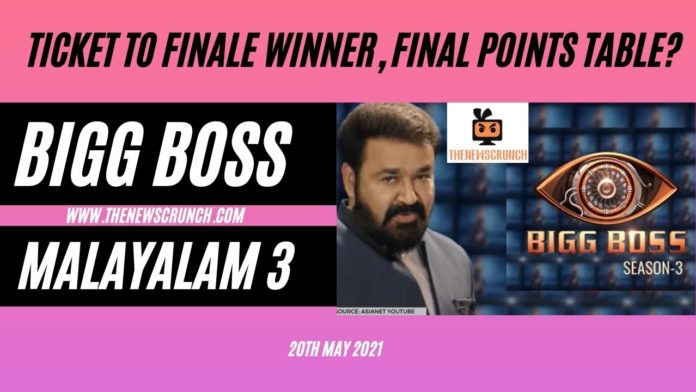 Bigg Boss Malaylaam 3 enters a decisive phase as the ‘ticket to finale’ tasks enthrall the audience. The latest news about the show’s suspension following Tamil Nadu police sealing the Bigg Boss house has created ripples across the audience and fans. However, there is a possibility of the show continuing and reaching a fitting conclusion. The winner of the ticket to the finale task will be decided soon.

Day 95 of Bigg Boss Malayalam 3 began on a thrilling note. The competition stiffens on the elimination voting results as well as the ticket to finale tasks. Dimple rose from the ashes to become the leader of ‘ticket to finale’ points table. The fiercely competitive Ramzan was tied in the second position. Rithu was at the bottom of the points table and needs to work hard to climb up the ladder.

The episode on the 20th of May 2021 (Day 95) featured the balloon task. Two balloons are tied to the legs of the contestants. Ramzan was voted out from playing the task. However, the toughest competitor of this edition of Bigg Boss watched silently as Manikuttan and Kidilam Firoz were eliminated first.

Rithu and Anoop played exceedingly well and managed to enter the top two. As a result, Anoop entered the top position in the points table.