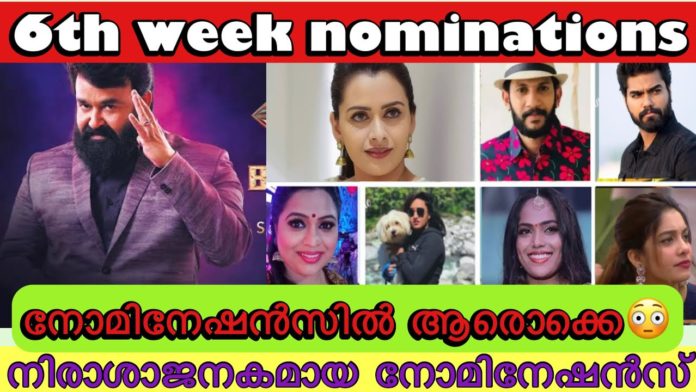 Bigg Boss Malayalam Season 4 lost two people in one day. Naveen and Daisy. With this, Bigg Boss lost two strong players who were active in the house and played a good game. Now in its sixth week, a new list of nominations has been released. This week, as in the previous week, the list of strongmen is in the nominations.

There are currently seven people on the eviction list. Many of those who have been playing the safe game have escaped being nominated this time around. Read on to find out who won the nomination.

Suchitra’s nomination came as a complete surprise. Suchitra mentioned the name of Dhanya, who is always with her close friend. Both were heavily criticized last week and this week for escaping the nomination. Suchitra was shocked to hear the name of her close friend Dhanya in the Bigg Boss house. Suchitra’s name is mentioned as Dhanya. Secondly, Suchitra’s name is Dr. Rob. Ronson nominated Lakshmi Priya and Robin. Sooraj also mentioned the names of Robin and Lakshmi Priya.

Robin and Aparna both nominated Moment and Ronson. Dilsha Ronson and Sooraj, who came next, were nominated. Dilsha Sooraj’s name was mentioned unexpectedly. Meanwhile, it is noteworthy that Dilsha, Robin and Aparna mentioned Ronson’s name. Sooraj and Dilsha were the only nominees. As expected, Nimisha nominated Robin and Lakshmi Priya.

Bigg Boss was giving special powers to the last captain, Akhil. Akhil got to nominate two people directly. Bigg Boss gave Akhil such an opportunity to target those who love the safe game. But Akhil’s names were Blessy and Dilsha. Akhil said that Blessy was mixing personal matters and games with others. Akhil had said that Dilsha has become a shadow of someone else.

Akhil’s nomination has drawn criticism from fans. The aim of empowering Akhil was to get Suchitra, Dhanya, Sooraj and Aparna on the field playing safe games. Naveen had yesterday criticized Dhanya and Suchitra for playing a safe game and not getting nominated. Mohanlal had also pointed this out. But fans say that Akhil’s nomination of Blessy and Dilsha for saving his friends and playing a good game was not right.

Robin, Lakshmi Priya, Nimisha, Ronson, Jasmine, Blessley and Dilsha are all seeking votes this week. With all seven of them strong, it is certain that an unexpected eviction will occur, as it did last time.