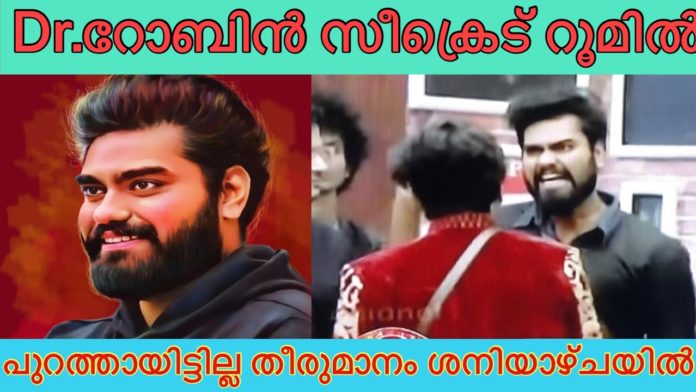 Things at Bigg Boss House are unpredictable. It is not possible to predict when or what will happen. Now what happened in season two and three of Bigg Boss has been repeated in season four. Physical attack will not be allowed on the Bigg Boss show. Bigg Boss has the power to exclude physically challenged people from the show. Two contestants have been expelled for violating the law in previous seasons. Dr. Rajith Kumar and Feroz-Sajina couple were eliminated for violating the law.

In the current season 4, a contestant has arrived in the same situation. It’s not going to change, it’s Dr. Robin. Dr Robin is the most popular contestant in Season Four.

The audience is shocked to see the latest developments in Bigg Boss House. There is a big fight going on at home. The fight was between Riyaz and Robin. The bottom line is a dispute over the task. The video released indicates that Riyaz was beaten by Radhakrishnan. The audience wonders if the doctor will get the same treatment as Rajith Kumar and Sajina Firoz.

Now comes the news related to Dr. Robin. Following the beating, the doctor was transferred to a secret room. Only in this coming weekend episode of Mohanlal will it be possible to know whether the doctor will go out or not. According to reports, the doctor will remain in the secret room until Saturday. Bigg Boss reviewer Vlogger Revathi shared this information through her YouTube channel.

In the video, Revathi confirms that Mohanlal will make a decision about Robin. At the same time, it does not rule out the possibility of returning before then. But chance is more likely to stay in the Secret Room until Saturday. But there is talk on social media that the Doctor will have a chance to watch the contestants from the secret room as he got the moment. If so, it’s going to be another game.

But before this, Mohanlal had given the last warning to Rob. Doctor’s fans are afraid that he will have to leave the show because of that. Robin is one of the best players in Bigg Boss Season 4 as he is able to play tasks with twist.

Dr Robin and Riyaz have been featured in this week’s Eviction. Riyaz is coming to eviction for the first time. There are 7 nominees for the 10th week. Riyaz, Robin, Blessley, Dilsha, Akhil, Ronson and Vinay have joined the eviction. This time it was an open nomination. Those who get one vote this time are also included in the nomination. If Dr. Robin gets eliminated due to the physical fight between Riyaz then it would be a big blow to the fans. Fact is it has happened before in Bigg Boss.