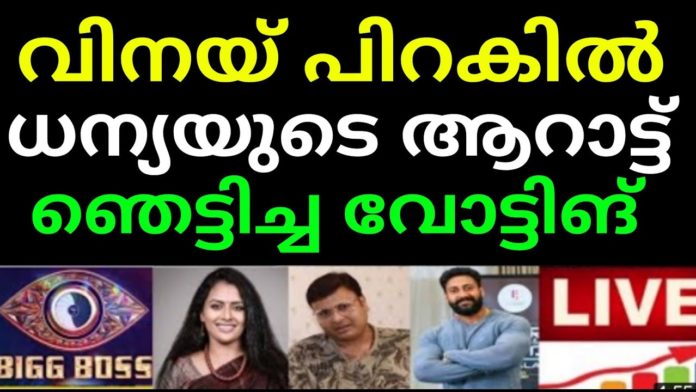 Bigg Boss Malayalam Season 4 has become one of the best television reality shows in Malayalam. A healthy and tense fight is going on between the contestants.

Akhil was out through the elimination process last week. With this, the number of contestants was reduced from nine to eight. Dhanya, Mary Varghese, Suraj, Ronson, Riyaz Saleem, Vinay Madhav, Dilsha, Lakshmipriya, and Blessley are currently staying inside the house.

No one expected Akhil’s eviction. It was believed that Akhil would win this time and every time. But the lack of votes made it easier for Akhil to get out.

Dhanya and Vinay Madhav got five votes and Ronson four votes. Nominations usually include more than one person. But this time it was limited to three. Lakshmipriya, Dilsha, Blessley, Riyaz Salim, and Suraj are currently in Saifa.

It seems that Vinay, Dhanya, and Ronson already knew they would be on the list. When the Bigg Boss nomination list was announced, they were just waiting for it. Dilshan was the only one who was shocked to see the list.

Eight contestants are left in Bigg Boss Malayalam Season 4, which started on March 27. The next steps are very crucial. Audiences eagerly await the following week’s task and how the contestants will perform. It remains to be seen which of the eight will advance to the final five.